Despite it being an amazing race, my screwed up footwear at the Annapolis Running Classic put me in a boot through most of the winter. It's easy to make excuses to not run in the ice and snow, but I spent most of the time aching (literally) to get outside. I am one of those weirdos who LOVES running in the ice cold. Subfreezing? Bring it on. I'd much rather shiver than sweat! The boot, however, dictated my laziness. 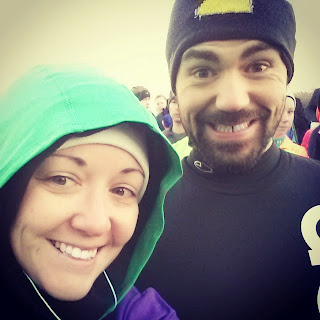 The boot finally came off sometime in January and it was time to get back at it. A 5K here and there and some training runs were pretty unmotivated. I needed a race to train for. Sarah suggested the Shamrock Half Marathon in Virginia Beach - a tremendous, organized, and super flat half with a killer expo. Sounded like the perfect race to get me back into things.

The Yuengling Shamrock race series has been going on for quite a number of years, but was more recently acquired by J&A Racing and turned into the behemoth running extravaganza that it is today. Approximately 20,000 runners descend upon an otherwise sleepy, off season Virginia Beach for three days of running, shopping, and of course, delicious Pennsylvania beer.

I chose to run the half, while Sarah ran the Dolphin Challenge (8K + half). Since Sarah was running the 8K on Saturday, I volunteered to give out medals at the finish line. Coolest. job. ever. Let me tell you, these medals weigh a TON when you have 40 of them on your arm.

Handing out medals to people as they reached their goal was an entirely new perspective on racing than I'd had. Despite being around a ton of people, racing is a pretty personal endeavor, so being able to see it from the other side; all of the smiling, relieved faces as they crossed the finish line and collected their prize. It was wonderful! 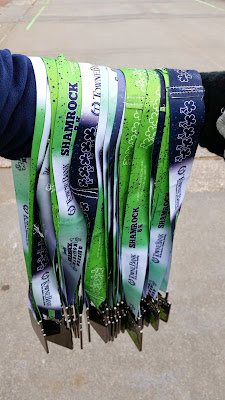 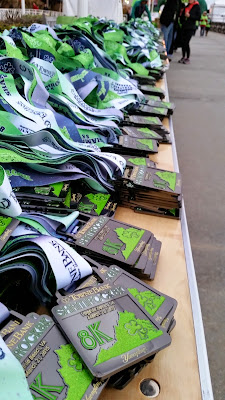 After the morning run, there was more beach and a tremendous expo to see. Everything from shoes and socks to gear and clothes to other races were on display in the expo hall. Exciting stuff for someone who'd only done small time races. That night, Sarah, her brother Adam, and I loaded up on the carbs at the hotel's pasta buffet dinner, laid out our gear for the morning, and headed to bed early - 4AM was coming quickly. I decided to wear my Under Armour Infrared hoodie and tights like I did in Annapolis. Paired with my sparkly green skirt and rainbow leg warmers, I was ready to sham...rock. 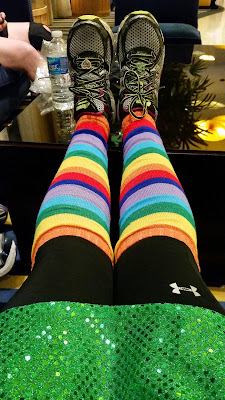 The thing I consistently noticed about Shamrock was that J&A's volunteers were incredibly, unwaveringly organized. From signage to bag check to race set up, I always felt like I knew what was going on and things went smoothly. Between the people, the guidebook, signs, and the app, there was a never a question what was going on where. We took the hotel's transportation to the race and then walked to the starting line. We got there pretty early, so we hunted down a bathroom and found a hotel lobby to stay warm in. The weather was mild, but still felt chilly that early in the morning. 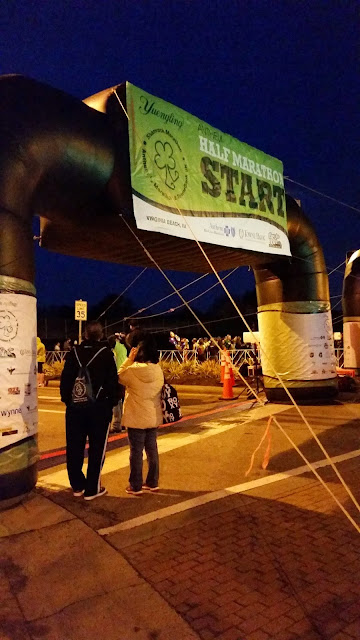 Being Adam's first half, he and Sarah had planned to stick together and keep a good steady pace, but not rush it. Me, on the other hand, I was poised and ready to haul ass to the finish line. We started, ear buds went in, and off I went. I felt good, really good. I looked at my first mile time and had a slight panic attack - a 10:40 mi/mi. Eeeek! Too fast, too fast. At least I thought so. Mile two: 10:44. Mile three: 10:51. Mile after mile I was staying around 10:40-50. 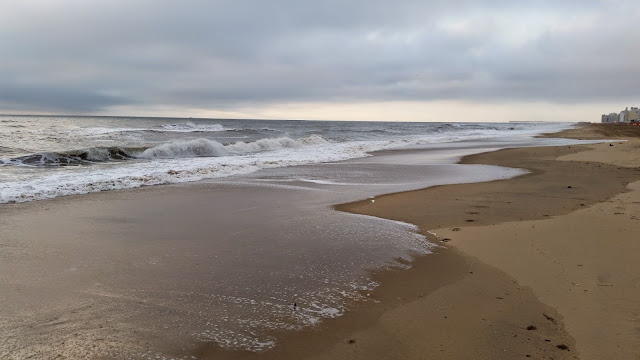 Along the route I was focused. Music going, gear was comfy - it was perfect. Then it got more perfect. If you haven't raced in Virginia Beach, you need to. Front of the pack to back of the pack; the neighborhoods you run through are READY for your arrival with signs, snacks, drinks...MIMOSAS! It's like some weird version of tailgating. I am pretty sure I saw a pop tent and a grill going.... And whoever was giving out gummy bears? On. point.

Ah, races. The only acceptable time to literally take candy from strangers.

Coming down Atlantic Avenue, with about a mile left, my legs turned to lead. The cramps were horrible. I knew I had such little left to go and no one walks on the boardwalk! Maybe it was the friendly neighborhoods, maybe it was the beach air, maybe it was the ridiculously flat course, but somehow, I was able to maintain an average of 10:55 mi/mi throughout the race and finished with a PR crushing 2:23:55 - nearly 6 minutes off my previous record at Hershey.

I wanted to cry. I flew over the finish line, grabbed my medal and goodies, and hobbled my way to the beach with a much deserved beer. I miss the beach so much; it'd been years since I sat on the sand. This was the perfect end to a race that I was truly proud of. 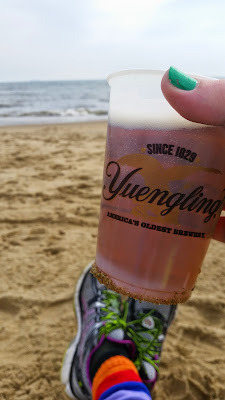 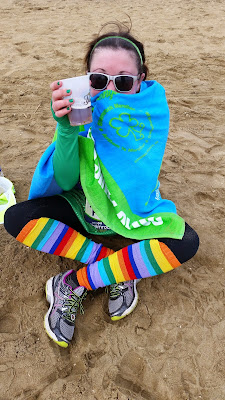 And thank goodness they give you a beach towel at the end because the minute you stop running, you freeze your buns off. After regaining some of the feeling in my legs, there was one last thing I needed to do before leaving the finish line area... 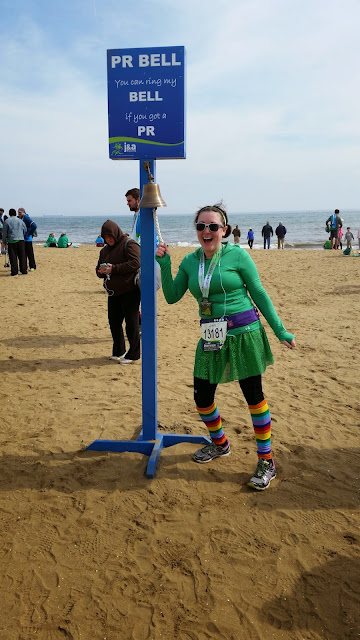 What an amazing weekend. Shamrock is going to be a pretty tough time to beat, but it's just a new challenge to tackle. Thank you J&A for a fabulous race! See you next year! 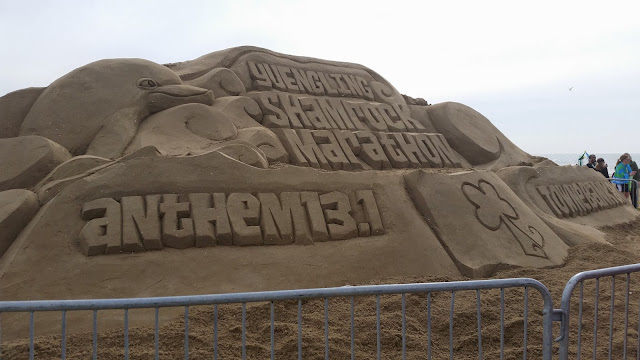