Emily Pearl Kingsly wrote a short story that became a beacon for a group of parents around the world. She asked the reader to imagine planning a fabulous trip to a place they've always wanted to go. You read the guide books, make lists of what you want to see and do, and learn the language. Imagine that you pack your bags and set off on your trip, but when you arrive, you're not in the place you'd been planning for; you're in a different place and can't leave. It's not a bad place, but it's not at all the place you'd expected to end up.

Kingsly's story, "Welcome to Holland" illustrates the shock, confusion, and grief of finding out that your child has special needs.

On Thursday, Charlie was diagnosed with Autism.

Whether we'd openly admit it or not, Jeff and I have always known in our hearts that something was different about Charlie. As our first child, it's always been an internal battle of wondering and worrying what was normal, what was concerning. Were we expecting too much? Were we making excuses for concerning behaviors?

When the evaluation process began a few weeks ago, I posted about his upcoming appointment, but never follow up about it. I was waiting to hear the whole story before attempting to retell it and even now, it's still a jumbled mess in my head. That day, he met with a psychologist, a speech therapist, and an occupational therapist. They played, they talked, did puzzles, and colored while I met with a case worker who asked me questions for about 2 hours. Coupled with his preschool teacher's evaluation and the therapists' experience that day, they concluded that Charlie has developmental delays surrounding cognition, language, and sensory self regulation and that he qualified for several types of therapy and special education instruction.

Charlie doesn't converse with us like a 4 year old should because he doesn't fully understand what we're saying. He's very intelligent, but without being able to process and communicate, it's all trapped in his head. Covered with a thick layer of anxiety, the psychologist said that the world is a pretty overwhelming and confusing place for Charlie. She said that he has many skills, but that without therapy, he won't have access to them. She also said that their interactions that day concerned her and that she wanted to conduct the ADOS (Autism Diagnostic Observation Schedule); the "gold standard" in testing for Autsim spectrum disorders.

Last Thursday, December 18th, we returned for the ADOS. Charlie met with the same group as before and gave them all hugs when he saw them again. "Mommy's friends" he called them. I sat in a little room connected to the assessment room and could hear them talk and play through the two way glass. At first, all I could hope was that he passed everything with flying colors, but as the test went on and I heard them having the same one-sided, confusing conversations with Charlie as we do at home, my heart settled. They were seeing exactly what we were seeing; we weren't asking the wrong questions or talking to him in the wrong way.

At one point, they tried to get him to play with a doll house. "Do you want to be the Mommy or the Daddy?" they asked, holding up little plastic figures. He ignored them, arranging and rearranging the furniture. When he finally took a figure, he mimicked the motions and sounds of "play," but was obviously confused as to what they wanted him to do. Again and again through the little interactions and conversations, he came up quiet, confused, or focused on arranging/counting/spelling instead.

After about 90 minutes, they went to discuss and came back in with their findings. This is the part where I remember bits and pieces, but most of it is a blur. The psychologist said that Charlie has a really, really hard time interacting with others. He isn't sure how to read people or situations, doesn't take part in conversations, and has a hard time transitioning from one thing to another. Socially and cognitively, he is on par with a much younger child. She said that she was diagnosing him with Autism. She said that based on the language and skills that he does have, therapy will help tremendously, but that this would be a long road of keeping him on the right track developmentally.

We talked about services, went through a huge stack of resource materials, and they answered whatever questions I could cobble together in my spinning head. The psychologist could tell I was overwhelmed; anyone would be.

"Go home," she said, "Enjoy the holiday and we'll talk about the details in the new year. Oh, and Mom," she added, "You get wine with dinner tonight."

So here we are in Holland. It's not where we'd planned to be, but where we feared we'd end up. We are heartbroken and anxious, but getting the diagnosis also gave an odd sense of relief. We could finally stop worrying and wondering and start doing and helping. Nothing has really changed, he's still Charlie, he's still the same exact person he was before. The only thing that has changed is our level of understanding and information about him and what he needs.

As confident as that sounds, I go back and forth between grieving the loss of the future we thought Charlie would have and being at peace that we can do this and he will be successful in his own right. And back and forth and back and forth. I'm scared and I'm already exhausted just thinking of the road ahead filled with therapy, special schooling, routine changes....and not letting it all absorb so much of our lives that we forget we have a second child.

Today, I'm having an "at peace" day. This morning, at least. I found this quote yesterday and it almost put me in tears. I find it appropriate that it's by Joseph Campbell, as I feel like Charlie's diagnosis is my call to adventure. I don't claim to be an epic hero by any means, but we are certainly embarking on a life changing journey. 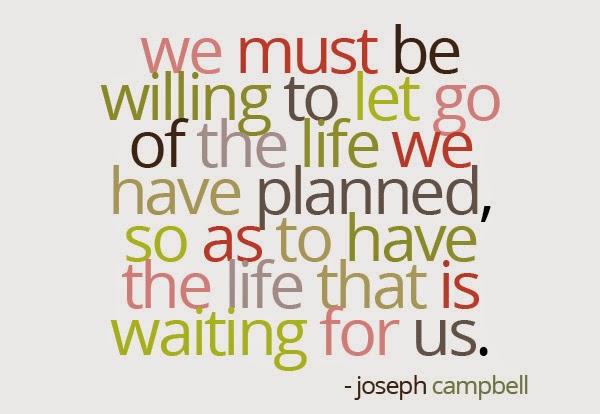