My First Half Marathon!

I DID IT!! I ran 13.1 mother effing miles! My first half marathon is in the books and I could not be happier. No, not that it's done and over with, but that it happened. Racing is all so new to me, so I'm not exactly an expert at race recaps, but I'll try to cobble the day together for you.

This all started when Sarah told me she wanted to run my first half marathon with me, in celebration of my 30th birthday. She suggested the Diva's Half in DC since the course was great for first timers and, c'mon, there would be lots of pink, sparkles, and awesomeness. It was a little sooner than the half I planned to run in Hershey, but training worked out fine and after our 10 mile run a few weeks ago, I was ready.

If you're not familiar with the DC area, there is this game they like to play when advertising events. When something says, "in DC" or "in the DC metro area," it could mean it's in the DC belt line, but more than likely it means somewhere in Maryland or Northern Virginia. In our case, the race was in "DC, j/k it's really in Northern Virginia wine country." Now, that was fine with us, just thought I'd share. ;-) 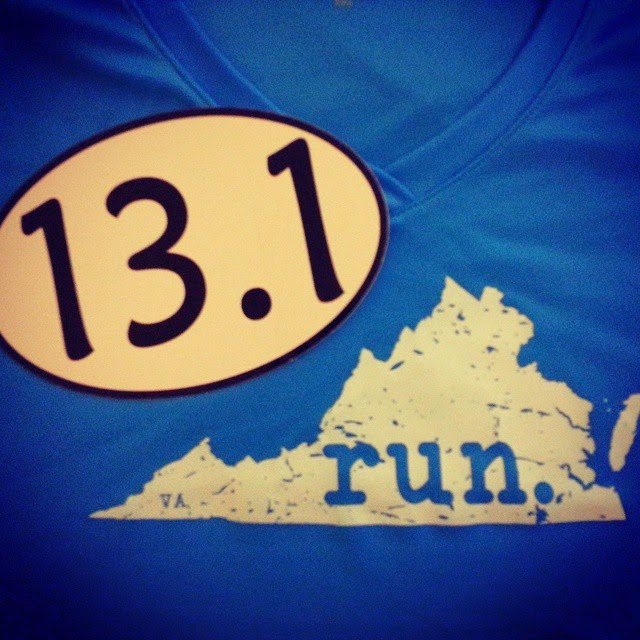 We drove down to Virginia on Friday night so we could pick up our race packets, check out the expo, and get some rest before the early morning start. The expo was small, but really neat. I picked up two awesome shirts and a quintessential running accessory.....the 13.1 sticker. I swear, expos do not cater to superstitious runners! I hated buying these things BEFORE I ran the race, but I had no choice!

After a little shopping and a delicious carb loaded dinner, we headed to the hotel to lay out our clothes for the morning and hit the sack.

One thing I never realized, a race that starts at 7:30AM requires you to be there at 6:30AM (and make that 6AM if you want to pee before you start!) That makes for a very early morning, which is not normally my forte. Somehow, I got my life together at 5AM and got ready to head out. I brought several things to wear; I wasn't sure what I wanted to run in. I decided on this and I'm so happy I did. I bought this shirt several months ago when I decided that I would be running the half. Aside from making me laugh, it's so true. This beast was on my bucket list and I had no idea when I wrote it that I would be crossing this off before so many other things. 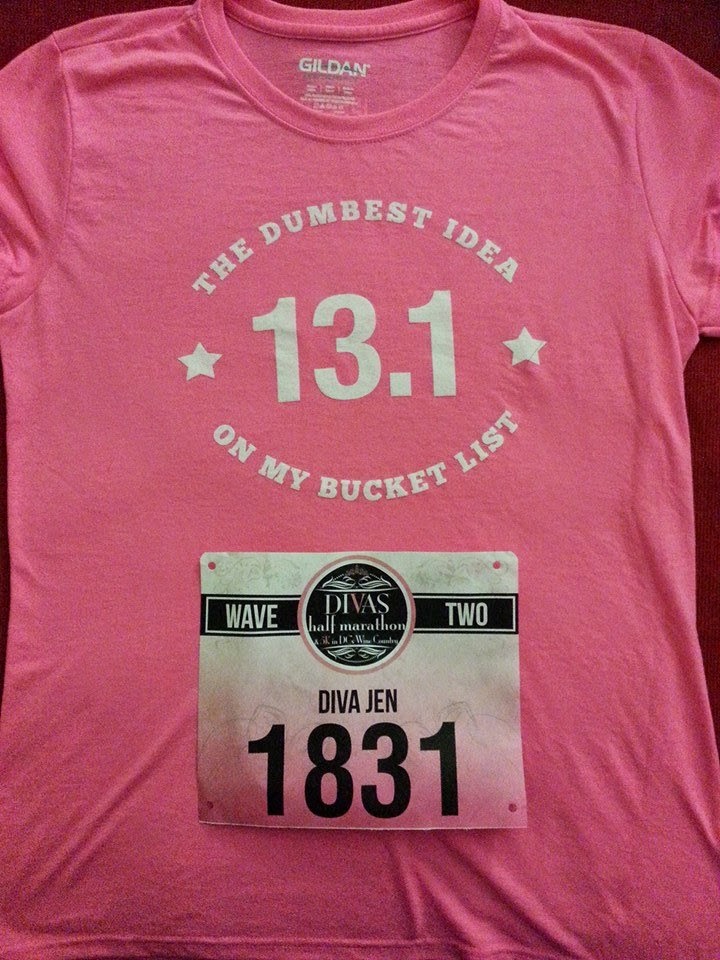 After a very confusing trek through the dark, foggy wine country, we thanked the heavens we purchased VIP parking and got our butts to the race. After realizing the time had come and gone for us to wait on the massive bathroom lines, we found our corral and got ready.

Nerves. There was a sea of tutu clad women on all sides of me (and a few guys here and there). Everyone adjusting their headbands and skirts, fixing pony tails, and setting Garmins. I couldn't believe I was there. Six short months ago when I ran my first 5K, I would never have believed I would be doing this. Yet, there I was. 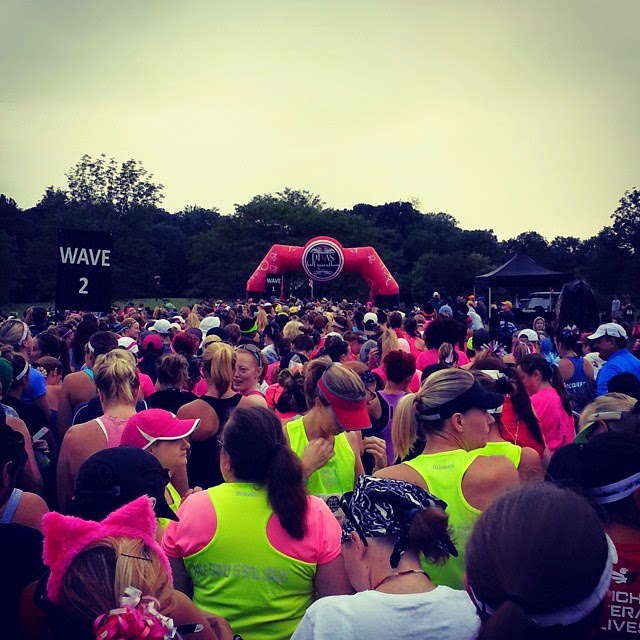 Wave one left and wave two scooted up towards the starting line. Wave two was announced and off we went.

As we got started, we refocused ourselves and talked about our goal - to finish with a smile. We ran the first mile at a solid, but slower pace. With 13 miles to knock down, there was no need to burn ourselves out. We stuck to a 2:1 run/walk interval and despite a few weird looks and one unnecessary (and slightly rude) comment from a woman sprinting by during mile one, we knew it was right and we were not the only ones run/walking.

Thanks to our planning, we were able to stick to mostly negative splits throughout the entire race. There were a couple of miles that included beastly hills that slowed us down a bit, but I am genuinely proud that at no point did I want to stop or give up. I felt strong and can honestly say that my last few miles felt as good as my first few.

The course was nicely paved road that was closed off to cars, save for the occasional idiot who somehow missed the hundreds of women in costume running far as the eye could see. The mile markers were a relief to see as they passed and the water stations seemed to pop up just as I needed one. I definitely could have managed my bathroom breaks better, but hey, what can you do.

My favorite part of the race was the other runners. The kind words, the waves and head nods, the encouragement, the hilarious racing shirts, the inspiring quotes - it was awesome. One woman was running 7 months pregnant, another for a lost loved one. One runner I met, a man named Sid, had run hundreds of half and full marathons, wearing a different fallen solider's picture on his back for each race. The inspiration was incredible.

You know the days where you REALLY feel like you're living? This was one of those days.

The perfectly overcast day turned to drizzle as we rounded the course to the last half mile. We were speeding past other runners and I could hear the music and excitement at the end. At the 13 mile mark, with .1 mile to go, a team of volunteers handed out pink feather boas and tiaras. Then the last .1 mile. A distance I could hardly run with any kind of confidence less than a year ago.

The announcer called our names as we crossed the finish line. I threw my hands up and wanted to cry.  I had done it. I moved my body for 13.1 miles. What a feeling. 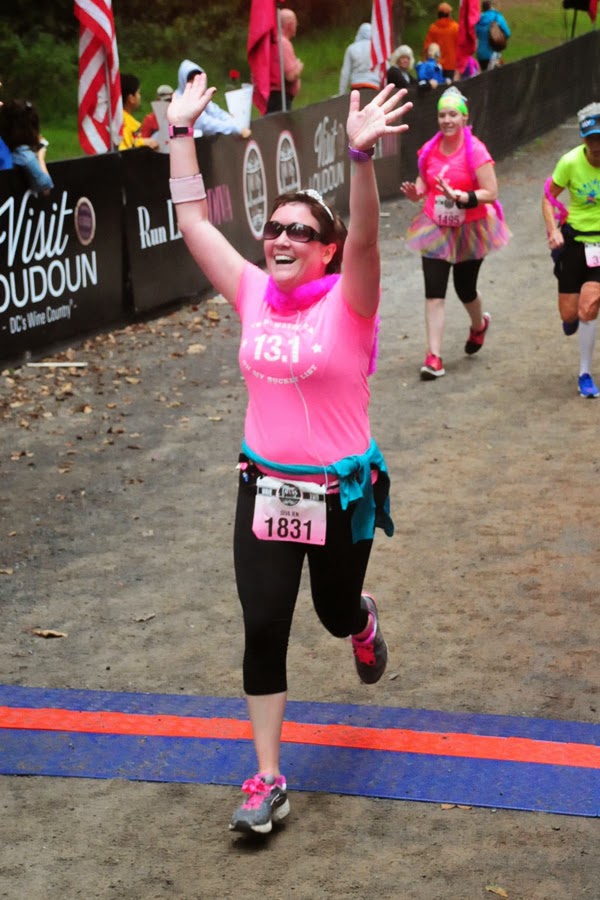 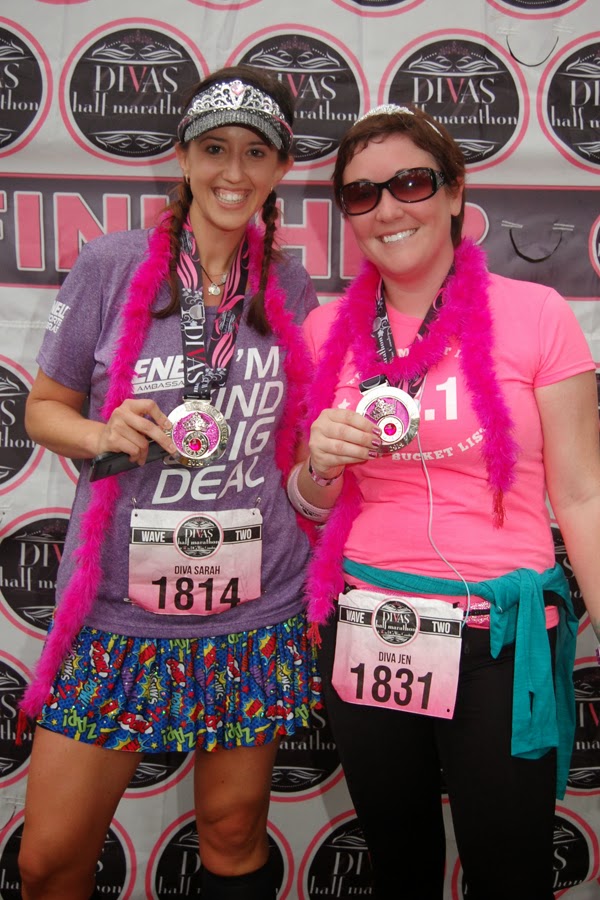 We finished in about 2 hours and 41 minutes. Not too bad for a crowded, hilly course. And as predicted, as soon as I was done and had gotten a bit of rest, I was back online looking for more races. I've got the bug.

I used to tell people who ran for fun that they were nuts. The truth of it is that yeah, we are kinda nuts. The thing I appreciate about running is just that; it has a mystery to it that you can only understand if you do it. It's such a simple thing, the simplest of things if you think about it. Movement, forward motion. It's what we're made for, so that's what I'll do.

A tremendous, unending thank you to Sarah. You are an incredible inspiration to me (and many others out there). I may have been able to physically run these miles without you, but without your motivation, positivity, and kindness, I would have had no idea what I was capable of achieving. The courage and confidence you helped me find has truly changed my life. You are a beautiful person, inside and out, and I'm so appreciative to have you as a friend. 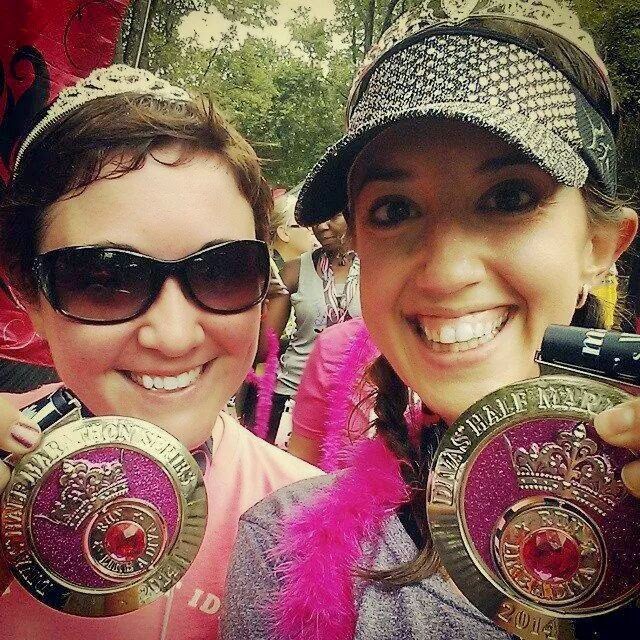