Ever since he was tiny, Charlie has been a fairly sick kid. It's hard to quantify what that means because all kids get sick and all daycare kids get especially sick, but I've always wondered what was too much. In his short life, he's had numerous illnesses and infections that few others around him seem to get. While the occasional strep epidemic rips through daycare, often he's the only one that gets sick...really sick. From bronchitis to pneumonia to croup, strep, RSV, and at least 15 ear infections, he's had it all. Don't forget about that year of c diff that he just couldn't shake, no matter the antibiotic. It's not just what he's getting and how frequently, but the number and strength of antibiotics needed to clear it up....it's just too much.

After meeting with a second gastroenterologist about his c diff infection, she took one look at his chart and told us that she couldn't help us until we got his immune system checked. This was the first time a doctor had suggested that maybe this was more than just illness, but a weak or impaired immune system at fault. After a summer of appeals and letters to the insurance company, we got an all inclusive referral to the immunology specialists at the Children's Hospital of Philadelphia; one of the best hospitals for this specialty. It's out of network (way, way out of network), but by some crazy fortune we got it approved.

An 8:00AM appointment was made and while we didn't get a spot at the Ronald McDonald House for the night before, they did help us make a reservation at a nice hotel a block away at a seriously discounted rate. Together, we headed out to Philly.

We had started telling Charlie a few days earlier that we were taking him to a special doctor in the city. He was not happy. This child does not like doctor and quite frankly, I don't blame him one bit. Luckily, once we arrived, the city it's self was enough to distract him. Getting a room on the 10th floor didn't hurt either. 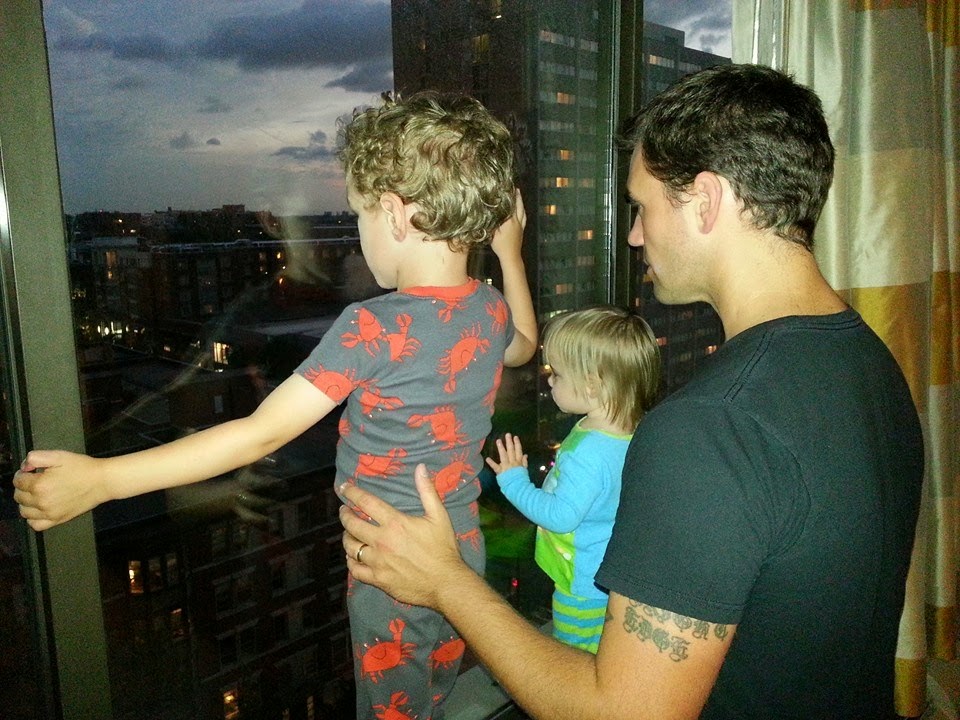 The next day, we walked to his appointment. I took Charlie in and Jeff took Ginny for a walk. We've been to several specialist appointments for one thing or another and this was, by far, the best appointment I've every taken a child to. We sat with the doctor and his team for TWO HOURS talking about Charlie's history, his growth and development, my concerns, their examination of him, what tests they wanted to run. I truly felt like they were trying to get a clear picture of what was going on and making a game plan. I had fully expected to have 15 minutes to explain what was going on, be handed lab orders, and go home. They even gave Charlie (and me!) crayons while we waited for the doctor to look things up and put together the lab orders. 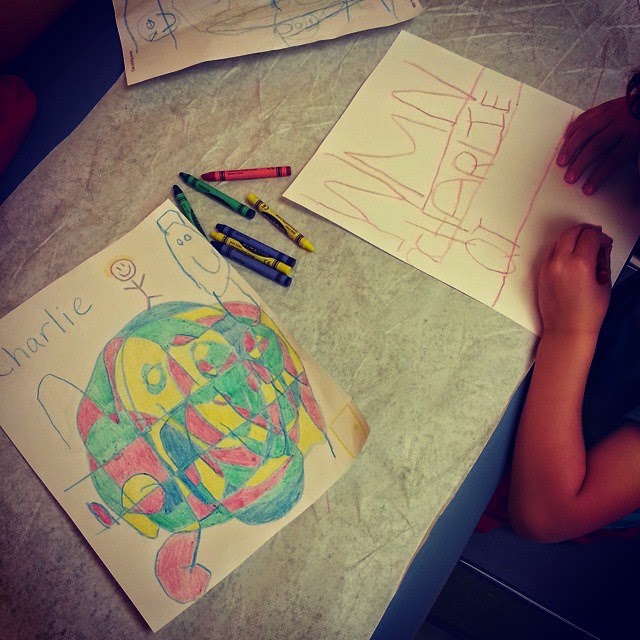 Though the appointment was significantly better than I expected, it still included a ton of blood work for poor Charlie. Seven vials of blood. UGH. I felt so, so bad having to hold him down so they could draw it. Thankfully, the phlebotomist was amazing and stuck him on the first try and got in and out as fast as she could. The blood work will break down the antibodies and immunities that he has and has built up over his life time and see how well his immune system is functioning.

On a nerdy note, the science behind what they're doing is kind of amazing. They can pull apart his blood and actually look at what antibodies he has, what is missing, and how well he is making certain cells. We should know more in about two weeks.

I have always wondered whether his immune system was up to speed. I hear a lot of excuses when he's sick; he was a preemie, he's in daycare, all kids get sick. It was such a relief to hear from the doctors that I am not, in fact, crazy or overreacting for wondering this. After looking at his file, they are just as concerned. Obviously, I'm hoping these labs come back that nothing is wrong, but either way, I just want to know what is going on and how to help him stay healthy.