It's happening. That urge to completely down size, declutter, and throw out half the crap you own. Its here. The nesting phase.

J is very excited, to say the least. I think he's been secretly waiting for it, actually. I'd say we do a decent job of keeping things relatively organized, but we haven't done a good thorough stuff purging since this time last year. With another kid on the way, its definitely time. No need for our house to look like it did when C was first born. Granted, it was a much smaller space, but oy. Talk about drowning in baby stuff. 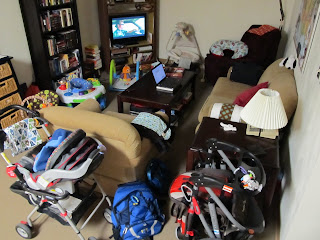 We've already gone through all of C's baby stuff and given a lot of it away. No use saving totes and boxes of boy clothes that we may or may not use at some point in the future. I don't have enough house for that kind of thing. I've found time to to through some of my clothes, make up/beauty stuff, and purses, but there's a lot more work to do. 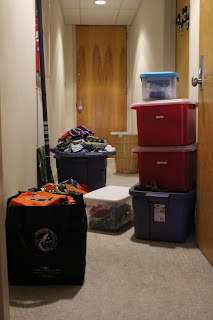 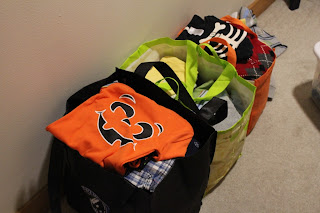 There are several spots in our house that really need to be addressed, but haven't for one reason or another. The kitchen, utility closet (essentially the stuff you'd store in your garage), my craft room, our clothing, our movie collection, the front hall closet...just to name a few. We end up losing things or buying extra of things and it annoys me to no end.

I'm going to be setting up "Toss/Donate/Sell" boxes in the living room and going at it. A bunch less stuff and a few organizing solutions later and we'll hopefully be much better off. Normally, I'm a pack rat so I might as well ride this wave of hormones and throw some crap out.
Posted by MommaM at 11:31 AM