This week the post theme for Toddle Along Tuesday is bedtime routine! A big thanks to Melissa at Growing Up Geeky and her co-host this week, Samantha from On Pink Bears and Pacifiers. 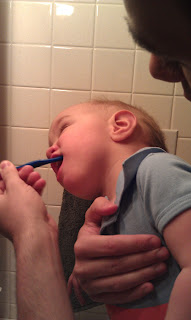 At the moment, C doesn't have a set bedtime though he usually goes to bed anywhere between 7pm and 8:30pm. We know we are getting dangerously close to the edge of meltdown gorge when he starts getting really quiet and lays his head down on anything soft around him - the couch, a pillow, my lap, etc.

First comes a fresh diaper (a double stuffed bumGenius 4.0), then pajamas and teeth brushing - courtesy of J, who has mastered the toddler teeth brushing hold. Next, one of us reads him a story; usually whoever got to spend the least amount of time with him that due to work or errands or what have you. 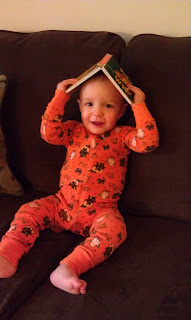 Here is C with his favorite book, "Peek a Who?" Every night that gets read at least once twice, but we usually throw in a longer book as well since that one is about 30 seconds long.

Some of my favorite books to read him are anything by Dr. Seuss, Skippy John Jones, Where Ever You Are My Love Will Find You, and Chicka Chicka Boom Boom.

Skippy John Jones is especially fun - its full of silly words and lots of onomatopoeia. He gets a good laugh out of it!

After a story, its off to bed! As I mentioned in his 18 month update post, we're on to a big boy bed, so we're trying to teach him to climb up in there himself instead of being laid down. He's getting it...sort of. He sleeps with a full sized pillow (he's like me and needs to snuggle to sleep), a crocheted blanket, the Sleep Sheep, and his monkey from Build a Bear. Last night was night #3 in the toddler bed and he's doing great! Nothing has really changed in his routine or how long he sleeps. 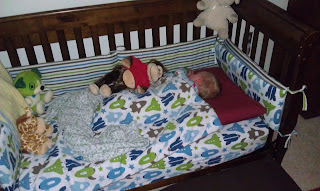 This picture was taken the first night we took off the crib side. Since then, we've added a toddler rail to the side to keep him from rolling off.

Though we occasionally get the midnight wake up call, he's been sleeping through the night for well over a year now (*knocks on wood*)

His diaper stays leak proof through his 10-ish hour slumber and he gets up starving and raring to go at round 6am everyday.

Stop by Growing Up Geeky to join the Toddle Along Tuesday blog hop!