Wow, I suck. Correction, last week sucked and I'm awesome for surviving it. Everything was fine on the home front, work however was busy, busy, busy. Anyway, today marks a year and a half since my (not so) little man joined us!

Clothing size: Every stitch of his 12 months clothes are put away and most of his 18 months clothes are on their way out too. He's in 24 months shirts for the most part and 18 months pants still have plenty of room. We just had to buy 2T/3T socks for those boats he's sporting.

New tricks: Walking! He's walking almost exclusively now and has been doing a bit of climbing too. He can successfully get off the couch without tumbling and is generally all over the house. He also loves to sing songs with hand motions and tries to follow along. C has also learned a few new body parts (ears, foot, and mouth) and can point them out!

Teeth: Suddenly, he hates having his teeth brushed. Makes for a fun time.

Sleep: After an almost successful attempt to climb out of his crib, we took the side off and turned it into a...*gulp*...big boy bed! He loves it and can get in and out of it by himself. So far so good.

Favorite toy: His rice box, the water table, and the cat's tail. We're trying to break him of that last one for the poor cat's sake.

Favorite food: He would eat a banana at every meal if we let him!

Things that make me all sad because he's getting so big: Between the walking and the big boy bed, I'm a crying mess.

A year later and 15 lbs. heavier. How things change! 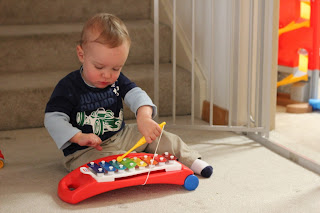 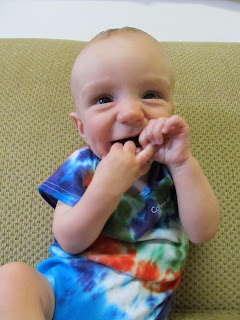