Why are There So Many Sippy Cups?!

Soft spouts, hard spouts, straws, flip tops, insulated, disposable.....there are so many kinds of sippy cups! It took several months and lots of trial and error, but we found sippy cups we absolutely love. 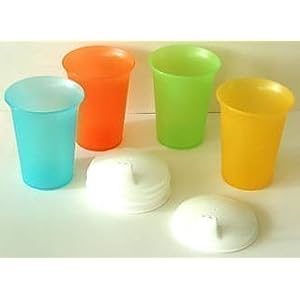 When I was growing up, I'm like 99% sure we had these or nothing and if you spilled it, you got wet. That was it. When my little brother was younger, I remember them coming out with spill proof cups and it revolutionized the sippy cup world. Now, 15 years later there have been so many sippy cup "advances" it blows my mind. For many, its a bunch of empty promises and wasted money. For others, C just didn't like them. Here is the evolution of our sippy cup trials.

Over the past year, we've tried...

Tommee Tippee Explora Trainer Cups
We bought these since we used TT bottles and they were apparently the best "orthodontic" spouts out there. Right. The spout was too hard for him to figure out at first (you had to bite it to open the valve) and when he finally did, it pretty much poured water all over him. Not good.

Playtex First Sipster
Maybe the first spout was too soft and too much water came out? The harder spout was no better. We realized that with his huge noggin, he couldn't tip the cup back to drink without falling over. On to the straw.

Munchkin Might Grip Flip Straw
Some people swear by Munchkin as good quality for the price, but I remain unimpressed. We bought this cup because it was inexpensive and we had already purchased other failure cups. As our first attempt at a straw cup, we realized it was impossible to show C how to suck through a straw and he would get too frustrated. In comes the squeeze sippy...

Playtex Lil' Gripper Twist and Click Straw Sippy
(And no, we didn't pay what Amazon has listed. Whoa.) This worked much better since we could squeeze the cup to show C that there was liquid in it. Once he figured out the straw thing, however, it didn't let liquid through fast enough for him and he would get frustrated. Next cup. 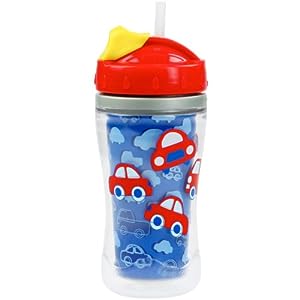 At first, these cups were the answer to our prayers. The straw was wide enough where C could drink (or guzzle as is sometimes the case), but were spill proof and insulated. Plus, the pieces were relatively easy to clean and keep track of. After a while, however, we realized they began to leak. Whether that's because of the dishwasher or what, but leaky cups aren't cool. We still use them, but if they leak much worse, we may need to toss the older ones.

The First Year's Take and Toss Cups
When we first got these, they were absolutely awesome - and still are to an extent. We can throw one in the diaper bag as a back up and it doesn't really matter if it gets lost. The issue came in when C figured out how to pull the straw out (they're not spill proof) and pour water out of the straw hole. We still use these, but only under supervision.

Gerber Graduates Insulated Straw Cup
These are our newest cups and we absolutely LOVE them. The pieces are easy to clean, there are no leaks, and they are super cute. Hopefully they hold up against the C monster.

Munchkin Click Lock Straw Sippy
In a bout of amnesia and with a coupon in hand, I bought another Munchkin sippy. Why?! I hoped their new "Click Lock" system would yield a better cup. I'll admit its nice to hear that "click" and know for sure its closed, but C still seems to get liquid out of the straw when he turns it upside down. Yuck. I've heard wonderful things about the spout version of this cup, but he doesn't do spouts. Oh well.

Depending on the brand, sippy cups can be pricey so keep your eye out for coupons and sales. Target is especially good at this and will often have a coupon on their website or a BOGO 50% off sale. Though their selection is usually 75% girl colors and 25% boy colors, there is usually something for us to get when the sale comes up.

When it comes to sippy cups, remember - every kid is different and is going to like different things. C is a straw sippy cup kid and will probably go right to an open cup never using a spout. To each their own. The important thing is to try different things, borrow cups from friends to try, and when you find something that works, buy a million* of them.