Could you get rid of half of your stuff?

If you want to take a real look at the amount of stuff you have, give yourself one week to move it all and half the space to move it into. Talk about enlightening.

We live in an apartment that we absolutely love, but unfortunately it is in a building scheduled for some pretty heavy renovations this summer. This meant moving all of our belongings to a temporary space from mid-April to the beginning of August, when we could move back in. Problem is, the available apartment was nearly half the size and short one bedroom.

We knew the move was coming for at least year, but not the exact date. At the beginning of April, we had a meeting with the building and project managers and decided the second week of April would be the week. Wait, what? Yes, I accidentally scheduled a move a week after the meeting deciding said move. I knew the date as a number, but somehow completely missed the small window of time it created.

We'd live in the apartment for almost 4 years by this point, settling into every nook and cranny. Yet, looking around, we were confident we'd get it done in a day or two. We were so wrong. 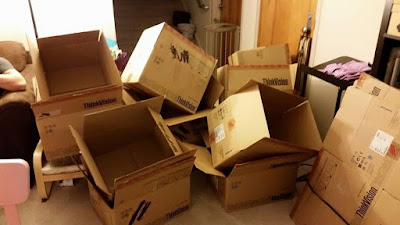 Packing started immediately. Since the actual move date snuck up, we didn't have time to coordinate work schedules. My job is very 9 to 5, but Jeff's is retail hours, so who the heck knows. For a week straight, while one worked, the other packing and watching the kids - two activities that I do not recommend doing alone, at the same time.

Luckily, my kids are easily entertained and we quickly discovered ways to get them involved. Ginny packed the same box of books and stuffed animals about 900 times and Charlie was in charge of labeling boxes, which as you can imagine, he loved. 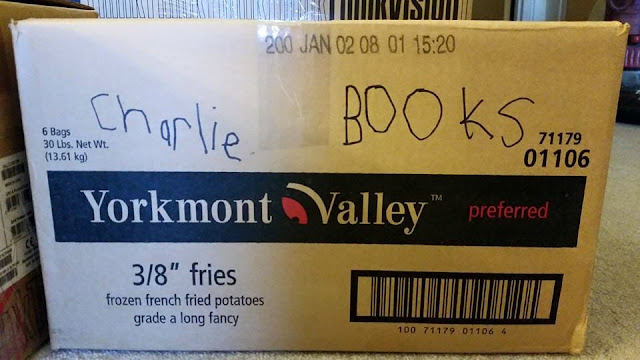 We also had a lot of "need" vs. "want" conversations. How many coffee mugs do we need, exactly? Do I really need three winter coats? Did you realize we still owned this?! Stuff just kept coming out of closets and corners - every time we thought we were nearing the end, we found more to be packed.

In the end, the move got done. It's hard to truly realize how much stuff you have until you lay hands on every piece of it in a short amount of time. We threw out lot, donated a lot, sold a lot. There is still a significant amount that we ran out of time to go through, so it got packed with the intention of deciding it's fate later.

Living with essentially 1/3 of our belongings for a summer has been surprisingly refreshing. We don't have a dishwasher anymore and are paying for laundry, yet somehow, the kitchen is cleaner and the laundry is significantly more up to date than in our old place. Why? I think the minimal space motivates us to keep things tidy, but I can't help but wonder if the smaller amount of stuff in general contributes to that as well.

Fewer toys means they get played with more and are quicker to clean up. Fewer plates and bowls means we need to clean them more frequently to use them again. Same goes for sheets and towels. Pared down wardrobes to fit in smaller closets means we only bring what we'll wear - why are we keeping the rest?

It's been an interesting time of reflection for both of us and I think our apartment will look drastically different when we move back in and unpack. I want to get rid of a lot of the stuff we have in storage. We just don't need it and there are probably other people out there who do.

This is another instance where an inconvenience is actually a blessing in disguise.
Posted by MommaM at 8:47 AM