It happens to everyone at some point, I suppose. That awful moment when they rip the tracker off your bib and mark down that you Did Not Finish. The reasons are all different, but the sinking feeling of failure is the same...

The Hyner View Challenge is not for the faint of heart. It's a 25K trail race through the mountains of the Bald Eagle mountain range. Even in the best of weather, it's a brutal, wet, uphill struggle to the end. Comprised of three mountains (Humble Hill, Psycho-Path, and SOB) - a total 4,200 feet of elevation gain. With over 20 stream crossings and sections steep enough to have you on hands and knees, grabbing at trees and roots for stability, it isn't like any other race I'd done before.

I'm not necessarily new to running, but from the moment I got to the starting line and looked around, I realized that trail running and road running were two very different worlds. There were no costumes or tutus on these runners, no - there were only gear packs, hiking boots, and lots of preparation for God knows what they'd find over the next several hours.

The first mile was on road - crossing a bridge to get to the trail head. Once we hit the start of the trail, everything stopped. All 1,200 runners bottle necking to a single file line as we entered the route. Not what I was expecting. Once we got through, another mile or two were spent along a cliff side, still in single file. What kind of race is this again? My Garmin was practically crying, clocking 25-30 minute miles as we trotted along the thin trail. 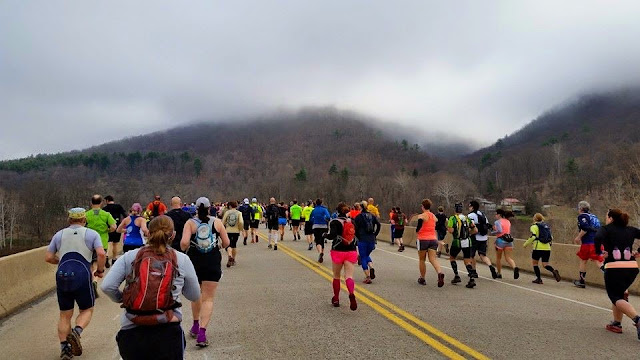 Then....it got hard. I would take 25K along the cliffside to avoid the nightmare that was Humble Hill. Every few hundred feet, you thought you were getting to the top; only to turn a slight curve and see another several hundred feet straight up the path. I have never been in so much pain - climbing a mile straight up a hill is no joke. Thankfully, I was with a friend - Emmy. She had not only done Hyner the year before, but had been training on these hills since she lived in the area. Whether she will admit it or not, she got my ass up that hill. 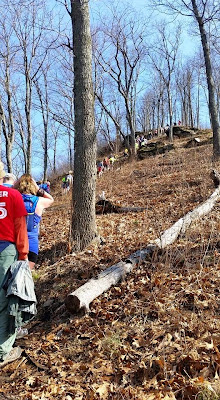 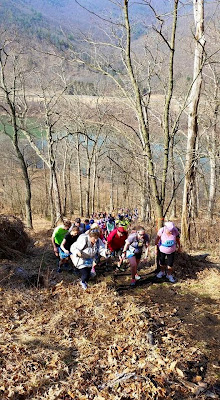 "Slow down if you have to, but don't stop. You can't stop. Just keep going." she said, over and over. I stopped several times and she was right - it was hard to get started again. At the top of Hyner View, we'd hit only about 4 miles, meaning there was two mountains and about 12 miles more to go. Insane, right? But really, check out this view. 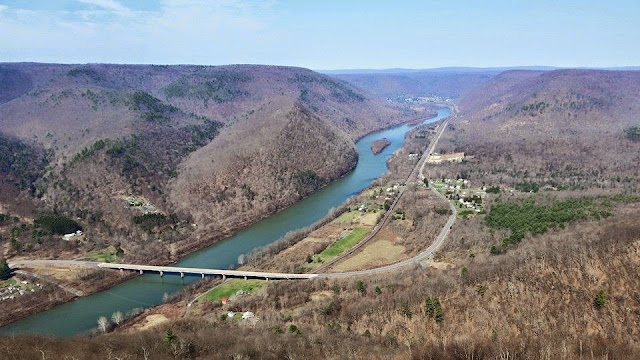 The aid station at the top was amazing. Water, every flavor of gatorade, sandwiches, pretzels, candy, fruit....you name it. They were filling water bottles and Camelbaks, giving out bandaids, and checking on runners. The volunteers were wonderful and so encouraging. I had to stop for a selfie before hitting the road again...

The way down was actually kind of fun. Some were so steep I swore my toes would burst through the front of my shoes, others were flat enough to have a run at it. The next two sections, The Hollow and Johnson's Run, were the most beautiful and enjoyable, but unfortunately for me, the most dangerous.

The Hollow was the valley between the two mountains. It was gorgeous; tremendous trees gave off much needed shade and cool streams jetting in all directions across the basin floor. The Hollow is also where you get wet. Emmy told me it would happen. She said, "I don't have time to stay dry. You're going to get wet, so just get wet" as she barreled through a stream, around a few runners trying to balance their way across on fallen logs. Truthfully, the cold water felt wonderful on my already sore feet, so I didn't mind sloshing through the shin deep water.....over and over again. 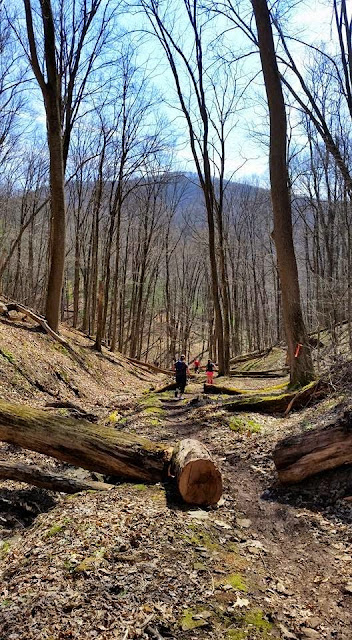 After The Hollow, we started up hill again. Johnson's Run and Psycho-Path are a fairly horrible combination of climbing over, under, and around trees and rocks. It also means climbing straight up a hill made of river rocks, mud, and wild branches. This was also, unfortunately, when the temperature began to skyrocket past the anticipated high of 70* to a sweltering mid-80's nightmare. Fifteen degrees doesn't sound like much, but when you're exerting this much energy, it can wreck your plans to have a good time.

When I run, I look up. I learned early on to not look at my feet; it's just road - it'll be there. This, was different though. Anytime I tried to focus on what was in front of me, I found myself slipping and tripping on what was directly under me; the terrain was too unpredictable. Walking at full speed ahead, I was looking down as I navigated across a patch of mud and sticks. With my hat on, I never saw it coming. A full size tree, laying horizontally about three feet off the ground, was an easy obstacle to duck under, but instead, I ran right into it head first.

The impact rang down my neck and into my shoulders, knocking me on my back. I stood up, what felt like instantly, and stood there for a second. People ran to me asking if I was okay, which surprised me because it didn't seem like a big deal. I remember walking, I remember hitting my head, I remember falling. Somewhere in there, I must have blacked out for a second because apparently it was a pretty loud, hard thunk.

I kept going; I wasn't in pain and felt fine, so why not? It was only mile 7 and there was plenty of race left. This is where things went down hill, fast. The ascent to the peak of the second mountain was grueling. Climbing over rocks and having to grab trees to keep moving forward. I found a walking stick at one point to give me leverage. About a mile out from the mile 9 aid station, things got fuzzy. I suddenly felt like I was hit by a truck - my head, neck, and shoulders ached and I was dizzy and nauseous. I hadn't even considered the head thunk and thought I was dehydrated.

As I climbed the last few hundred feet, I could no longer move my head or open my mouth; everything was stiff. I got to the top and found Emmy. I could hardly speak and the look on my face must have told her something was not right. She pointed to the aid station and I walked over. I told them something was wrong and they sat me down. I told Emmy to go ahead, I'd catch up. She was in it for time, I just wanted to finish. No reason to hold her up while I got myself together.

My temp was 101, my O2 saturation was in the 80's, and my blood pressure was the rock bottom of normal. After talking to me for a few minutes, the EMS volunteer in charge told me that she wasn't comfortable letting me continue, especially with another 7 miles to go. A race volunteer came over and took my bib tracker - I was done. I wanted to cry, but the truth was that I was so out of it and scared with how I felt that I was relieved to be getting help.

I wish I had more pictures to share of this beautiful race course. Unfortunately, I spent the rest of the day in the hospital getting fluids and being monitored for what ended up being a concussion. I know better than to run with my head down, but this terrain tripped me up (literally and figuratively). After some time in the hospital and a few days of rest, I felt better, but apparently healing from a concussion can take several weeks.

In related news, concussions suck. Headaches, confusion, forgetfulness - all things that I do not need in my life, especially this time of year at work. Now, a few weeks later, the headaches are gone and the forgetfulness/confusion is going away as well.

Honestly, I don't think I'll attempt Hyner again. Having gone up two of those three mountains was enough for me to gain a huge amount of respect for the people who complete it, year after year. I think I'll stick to road races; fewer trees to hit. I'll leave the trail races to the crazy awesome trail runners who make it look easy.