Yesterday I had the pleasure of running the 5th Annual Hershey Half Marathon, benefitting children at the Penn State Hershey Children's Hospital. Not only was this race kicked off by a pediatric patient receiving care at the hospital, but the entire atmosphere was cheerful, friendly, and supportive! As I mentioned in my prep post on Saturday, we left super early in the morning - 5:15AM to be exact. I can't lie, getting up sucked, but waking up the kids was oddly satisfying since it's normally the other way around. Charlie was not a happy camper and laid on the couch in a ball asking to go back to bed. I knew how he felt, but at least he could sleep in the car.

After we were all dressed and ready, off we went. I love the amount of traffic on the roads at 5AM on a Sunday morning. The answer is "none." It was only when we approached the park that we ran into a bit of slow down. Having gone to Hershey Park many times, I was surprised (and slightly scared) to see that parking was a free for all instead of the highly structured system we typically see. We all survived, but I would have really appreciated some parking attendants waving people along into spots instead of having to do the aisle by aisle hunt for an opening.

Packet pick up began at 6AM and the race at 7:30AM, so arriving right around 6:30AM turned out to be perfect. When I stepped out of the car the wind nearly knocked me on my butt. It was FREEZING. I knew I'd be fine once the sun came up and I got moving, but holy moly. I seriously regret not bringing a pair of sweats to throw on over my tights until the race started! The kids were all bundled up in the stroller and, a fun fact for you, the My31 Stadium Blanket fits perfectly as a rain/wind shield over a double stroller! We said our goodbyes and I headed over to the corrals. While they weren't well labeled or really enforced, I knew well enough to not be too close to the front. I wasn't a "walker" for the race, but I wasn't one of the spring chickens crowded at the front. Once the race started, it took about 2 minutes for me to actually cross the starting line. A race of 5,000 in a small space will do that to ya.

The first few miles felt AMAZING. The wind was pretty bad, but the sun came out and started to warm up. The pack started to thin out, but I found myself still in good company, meaning I wasn't falling to the way back. Around mile 2, I saw Jeff and the kids for the first time. They hauled ass from the start to the first spectator spot. Good thing too, I tossed my hat and gloves to him as I passed and rolled up my sleeves, finally getting comfortable.

The race course lead us through the town, through parts of Hershey Park (which was really neat!), and through the Milton Hershey School campus, where we were welcomed with tons of students cheering us on for miles. Their sports teams, marching band, clubs, and general students all lined up with signs and high fives - talk about encouraging!

At one point, around mile 7, I ran with a woman who had battled cancer and this was her first race back since going into remission earlier this year. Since the Hershey Half was the last race she ran before being diagnosed in the winter of 2012, she trained and trained to get back for this year's race. Talk about inspiring. The shirts and signs I saw today were wonderful. There was definitely the funny, cheeky ones, but I saw some really inspiring stuff. It's one of my favorite parts of running. 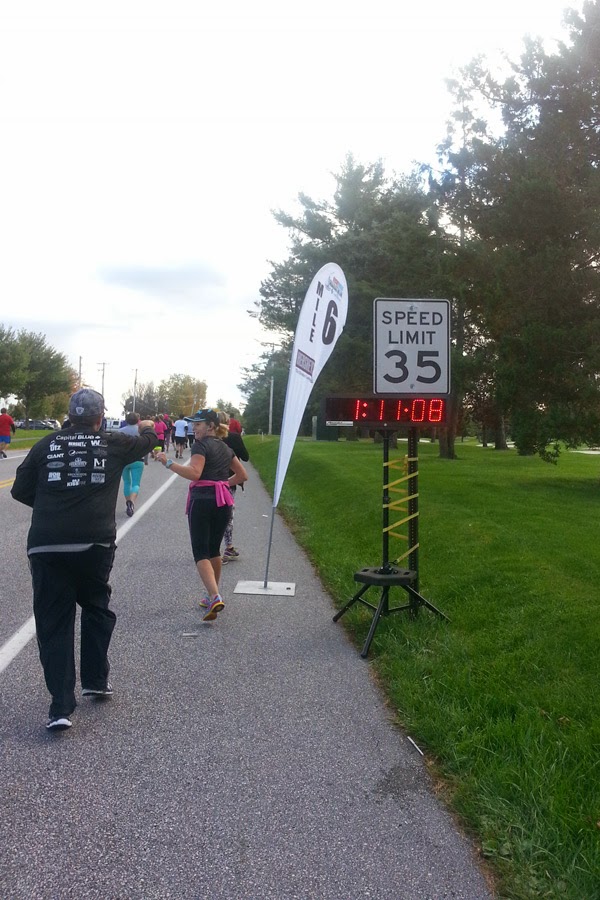 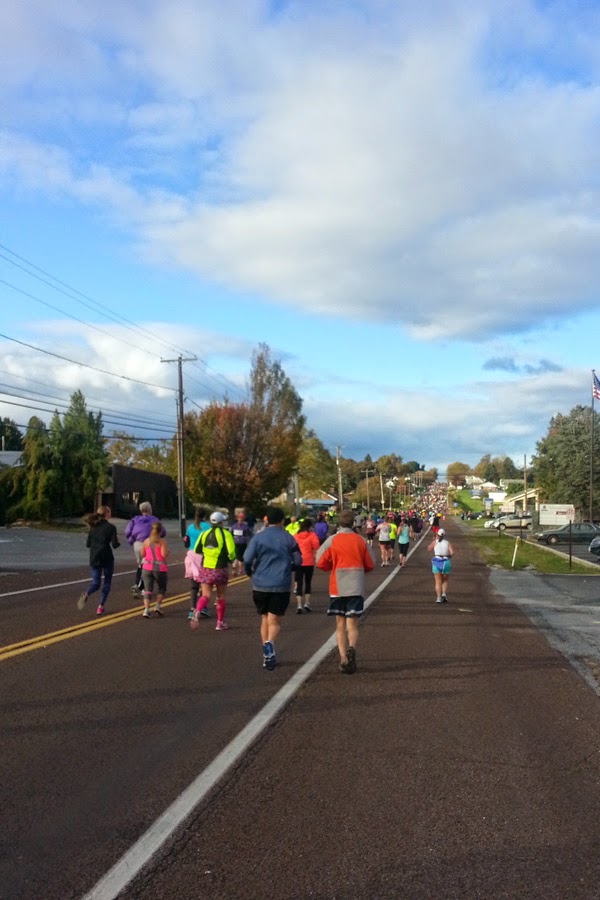 The other thing that kept me going was how many times I saw Jeff and the kids along the way. It had to be 4 or 5 times! He continued to run (with a front to back double stroller, no less) from spectator spot to spectator spot to see me pass by. By mile 11, I was hurting...bad. My feet and ankles felt great and my lungs were working for me, but my hips were on fire. Almost to the point of weakness. I've gotten that a few times when I've run; a stiff, locking pain down the front of my hips. I stopped to stretch several times, but the pain kept on. As I turned onto Chocolate Avenue and saw the hill ahead of me, I wanted to cry. Jeff saw me slowing down and yelled encouraging things to keep going. I only had a mile and a half left.

I crossed the finish line with a final time of 2 hours 29 minutes and 39 seconds, taking over 22 minutes off my previous time. 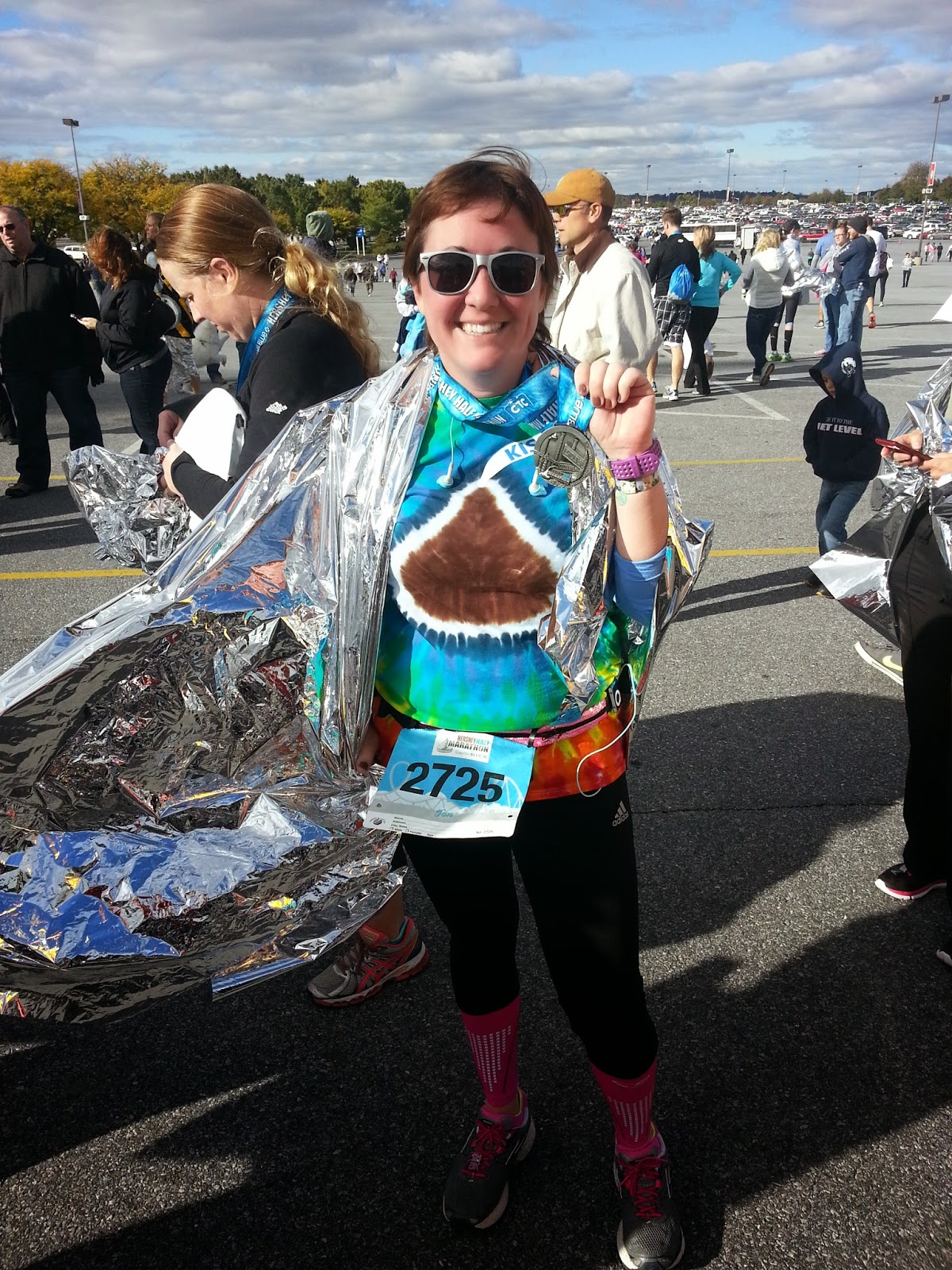 As I came across the finish line, I noticed that everyone had these space looking foil blankets. I didn't need a blanket, I was hot as heck from running. Well, the second I stopped running I figured out why everyone had a blanket. BRRRRRR!! Those foil  blankets are my new favorite thing ever. Holy moly, are they warm.

For my previous two races, I felt like the miles dragged at times. This race was different for some reason. While the end was pretty tough, I feel like the miles flew by for the most part. I also never felt the need to turn on my iPod, only keeping the ear buds in to block the wind (which worked like a charm, by the way). Maybe it was the fun scenery or the friendly people? I don't care, it was awesome. 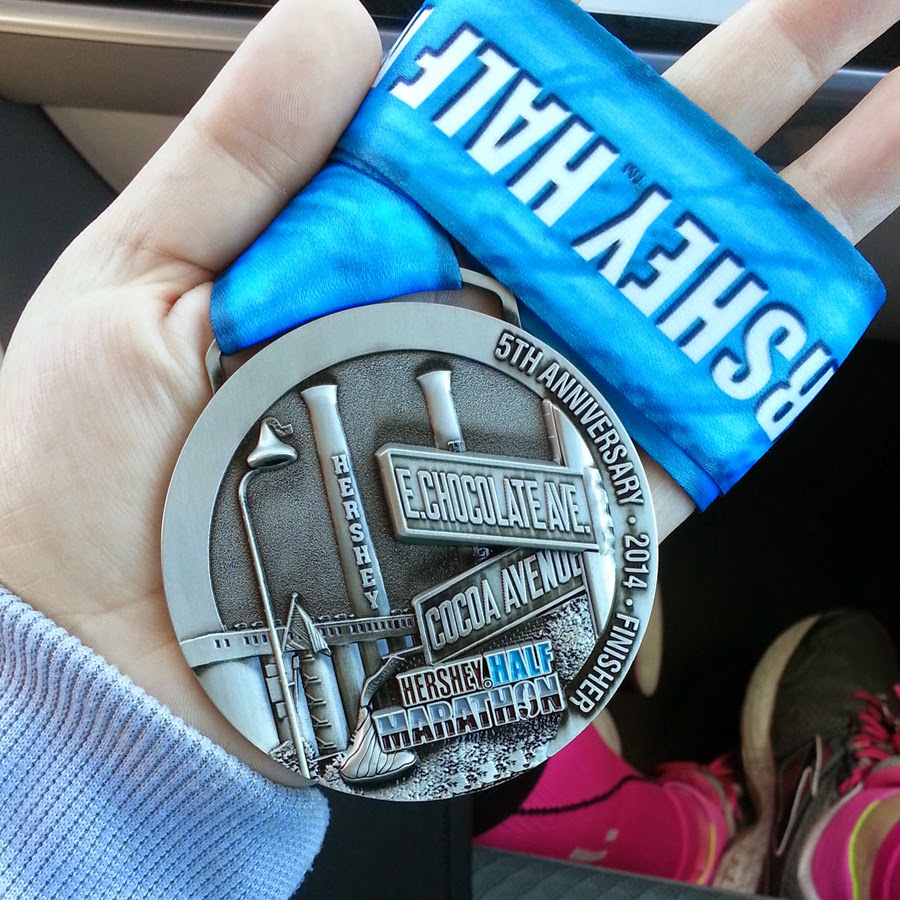 I hope to run the Hershey Half again next year. It was well organized, energetic, had a beautiful medal, and by darn, they had more than one flavor of Gatorade at hydration stations. Okay, maybe that last one isn't as important as others, but my hatred of lemon-lime is not a secret.

If you live anywhere remotely near the Hershey area, I highly recommend checking out the Hershey Half Marathon! It sells out fast, so register early in the summer to guarantee a spot!

A big thank you to Leslie from Greater Fitness for my awesome Hershey Kiss tutu! Leslie hand makes custom tutus to match any running outfit or costume you can dream up. I told her what I was going for, emailed her a picture of my shirt, and she sent me a coordinating tutu. Easy as that! Follow her on Facebook or Twitter and email her if you want information about your own custom tutu. 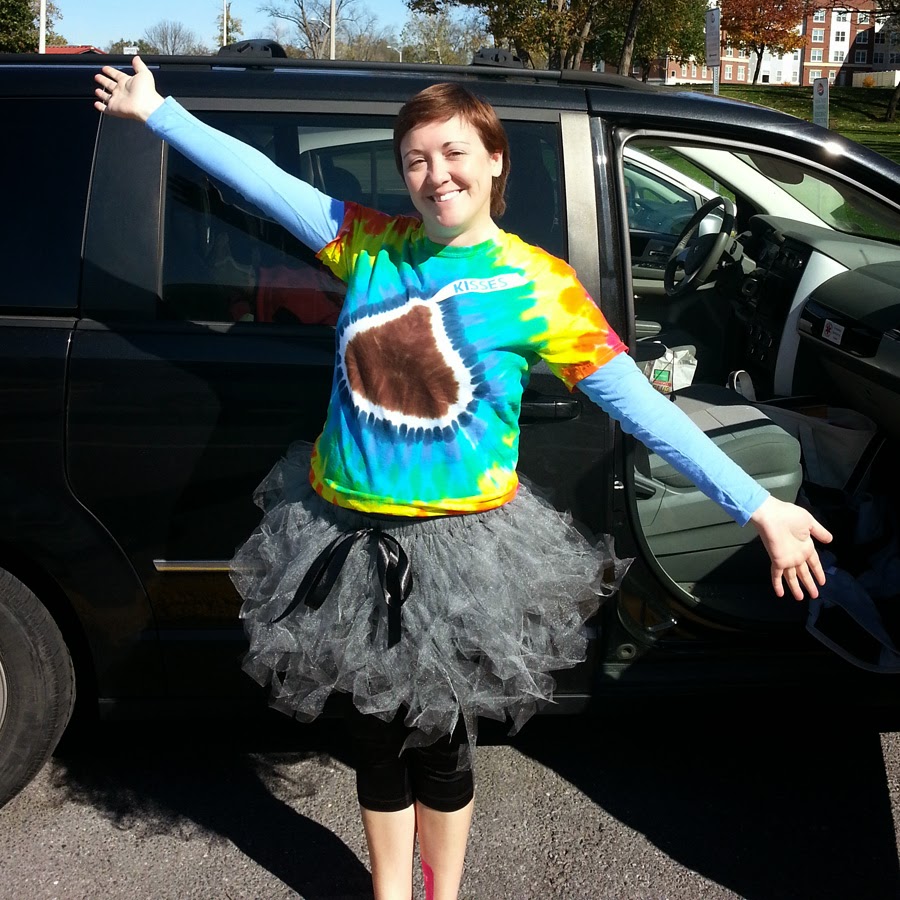