There are a lot of transitions from baby to toddler; bottle to cup, formula to finger foods, diapers to potty training, crib to bed. They all come with their own challenges, conflicting advice, and to make things even more confusing, every kid is vastly different so anything you've learned becomes useless in the blink of an eye.

Sleep is such a precious thing that many parents are afraid to "mess with" something that works. Am I crazy? Maybe. Ginny is 14 1/2 months old and tonight will be her first night in a bed instead of her crib. 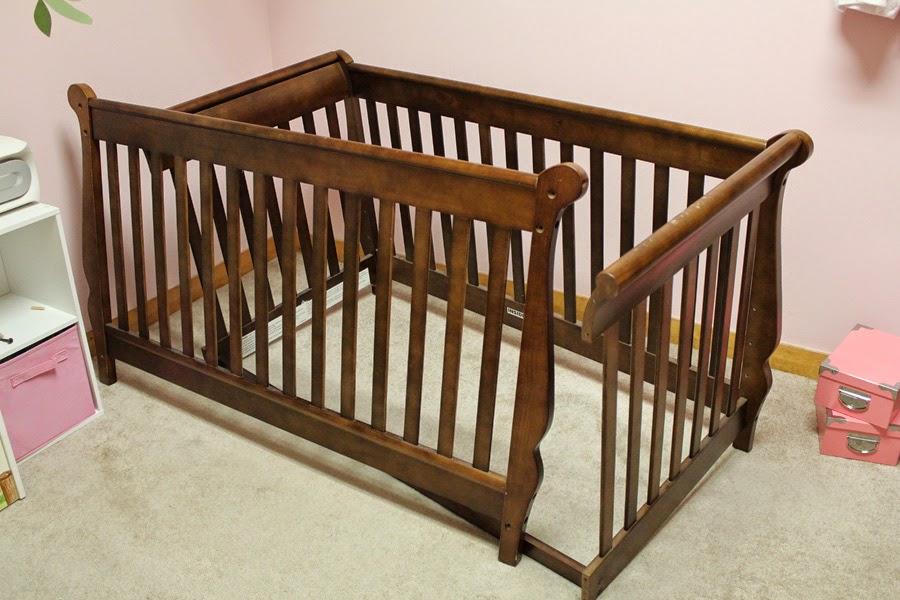 Why? A few reasons. First, when we bought Ginny's dresser from a friend, they offered the matching bed frame, but we didn't think we'd want it. They were getting rid of it this summer, however, so we decided to take it to refinish like the dresser. We were also given a full size mattress to go with it. With nowhere to store a full size bed not in use, it needed to go up! Otherwise, it doesn't bother us to move her over to a bed at this point. She's a climber and a bit of a wild child, so I'd rather be proactive before she's scaling the crib and falling on her head.

In my (limited) experience with siblings and my own kids, this is an easy transition if you do it right. While no advice will work for everyone, this is how I've successfully transitioned both of my kids to beds without much fuss....so far. *knocks on wood* 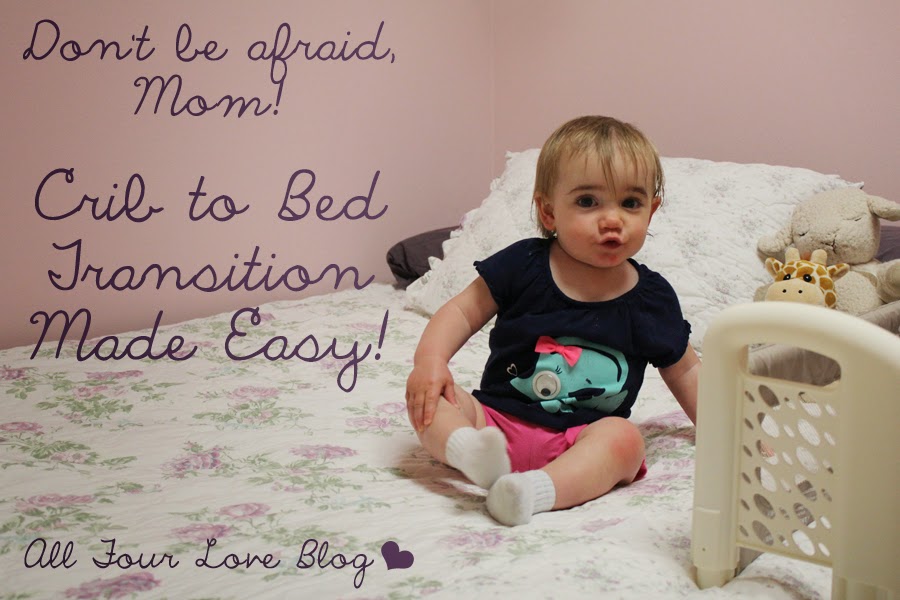 Ultimately, it's up to you when your child will move from crib to bed. Well, unless they're climbing, in which case it is time. Personally, I'd rather reinforce a routine and redirect a younger toddler than negotiate, plead, and fight with an older toddler. Charlie is currently in a "NO I DON'T WANNA" phase and I can't even imagine training him to stay in a bed right now. I can hardly get him to get dressed or eat a meal.

Another perk of transitioning a younger toddler is that they are less aware of what is going on around them. Not totally unaware, but much less so than an older toddler. At 18 months old, it took Charlie over a week of being in a toddler bed to realize he could climb out after we'd tucked him in! I'm not kidding. Already tonight, Ginny has laid down in her new bed as if it were her crib without a second thought. Which leads me to my next point....

Transitions are as big of a deal as you make them. Yes, some kids are higher strung than others and have a difficult time with change, but in general the less of a big deal you make of something, the less stressful it will be on the kid. Acknowledge it, sure, but dwelling on something or telling the child "it will be okay, don't worry" before they've even begun to worry only triggers them to be concerned. Your child looks up to you and trusts you. If they see you confidently going forward, they will follow suit.

Tonight, Ginny got cleaned up and changed, we read a story, and she laid down - just like any other night. We didn't try to explain the new bed to her or do a song and dance in anticipation of a melt down. Its bed time, here's the bed! 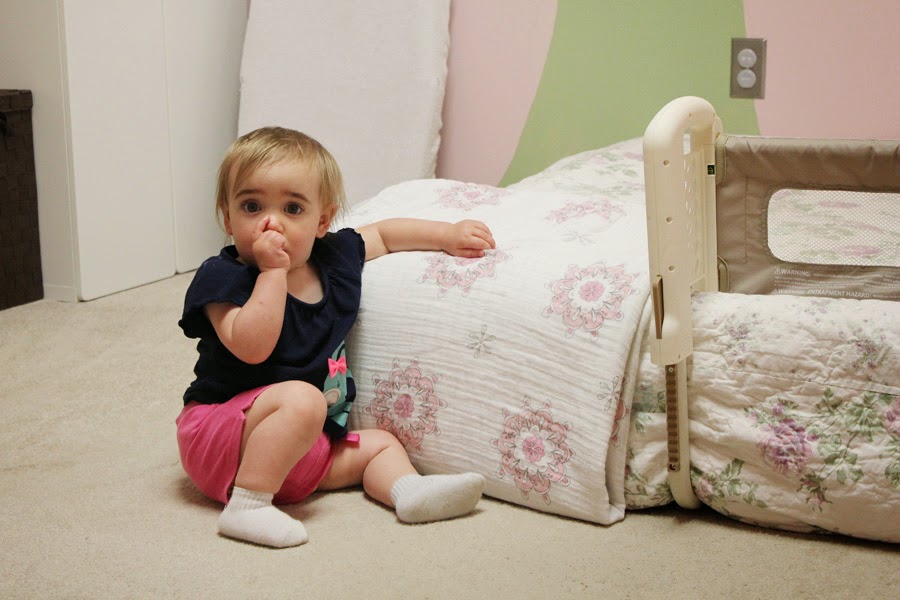 Okay, bear with me on this one. I've always been taught that when you travel with your dog or cat to bring a piece of their familiar bedding to keep them calm in a new place. Why are people so different? Lately, Ginny has been sleeping on top of her crib size bed spread and cuddling with her aden + anais Dream Blanket

. Even though I bought her this beautiful matching bedding set, this isn't the time to toss things up on her like that. I laid out her bedding exactly as it would be in her crib to create a familiar setting and trigger the "it's time for bed" message. 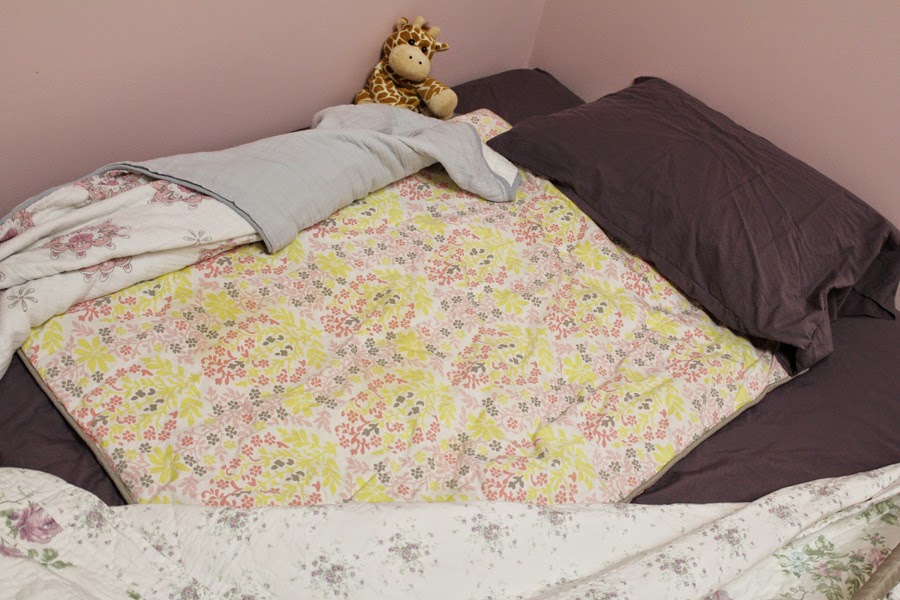 Fight the Urge to Cuddle

Don't do it. Fight the urge to lay down next to your sweet baby on their first, scary night in a big kid bed. You weren't able to lay next to them in their crib, so suddenly laying with them during this transition is only going to set you up for expectations you cannot possibly fill. It's a slippery slope, my friends. If it's part of your routine to read a story and you want to sit in bed for it, that's fine (unless you notice it creating a problem), but avoid the urge to lay down and cuddle until they're unquestionably settled into their new bed routine.

Also along those lines, fight the urge to play. Since little ones are used to being put in their crib only for sleeping, until they are 100% settled into the bed routine, avoid using the bed space for anything but bedtime stories and sleeping. Only using a bed for rest and sleep activities signals your body to relax and promotes healthy sleep. That's some psych major knowledge thrown at'cha. 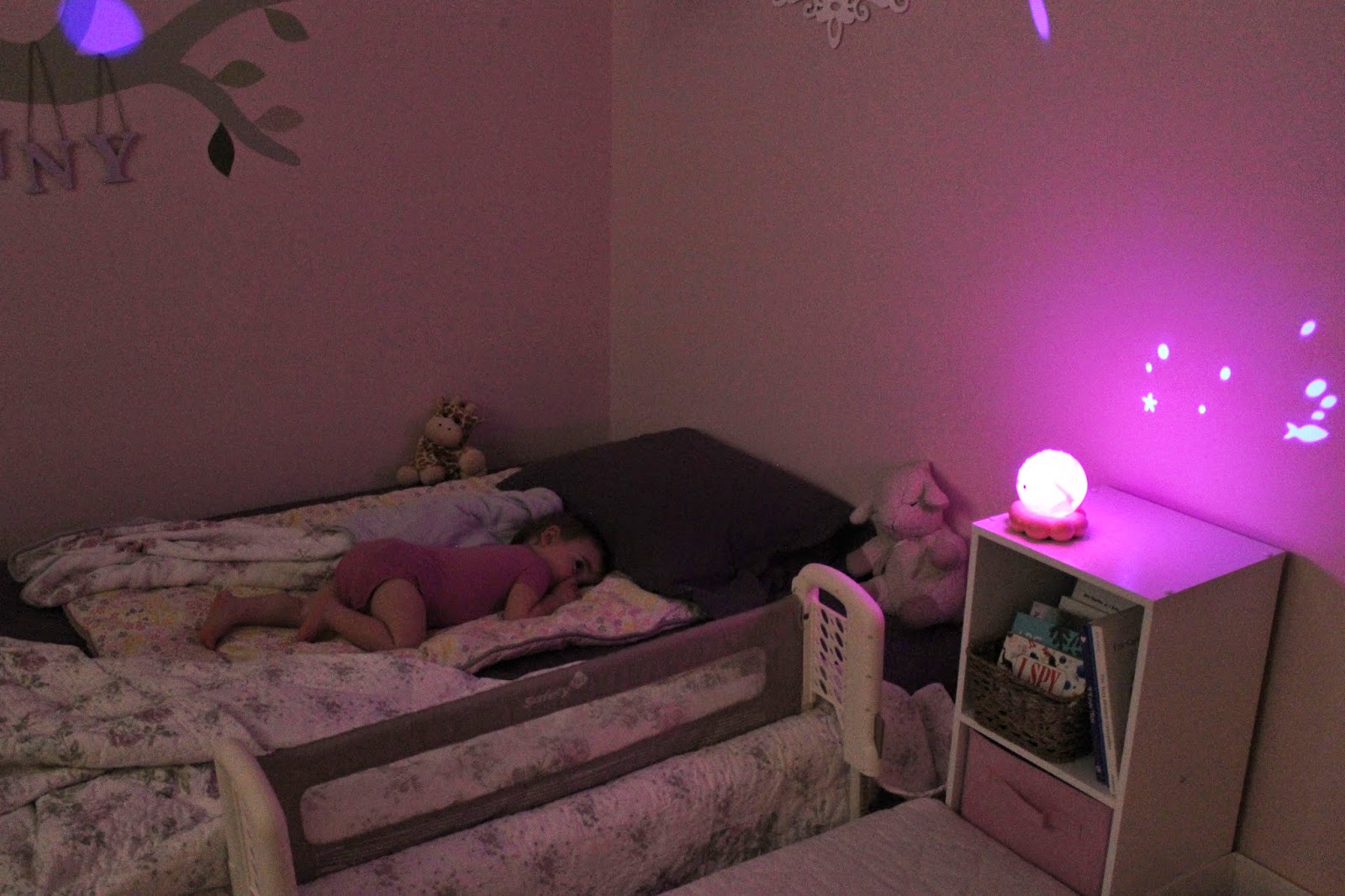 Now, just because Ginny laid down tonight and went to sleep doesn't mean anything. I'm not totally naive. We spent the last week baby proofing and cleaning up her room in preparation for a tiny tornado to be unleashed in there. We anchored her furniture to the walls, took out unnecessary furniture and accessories, and did a general sweep with outlet covers and other baby proofing gear. 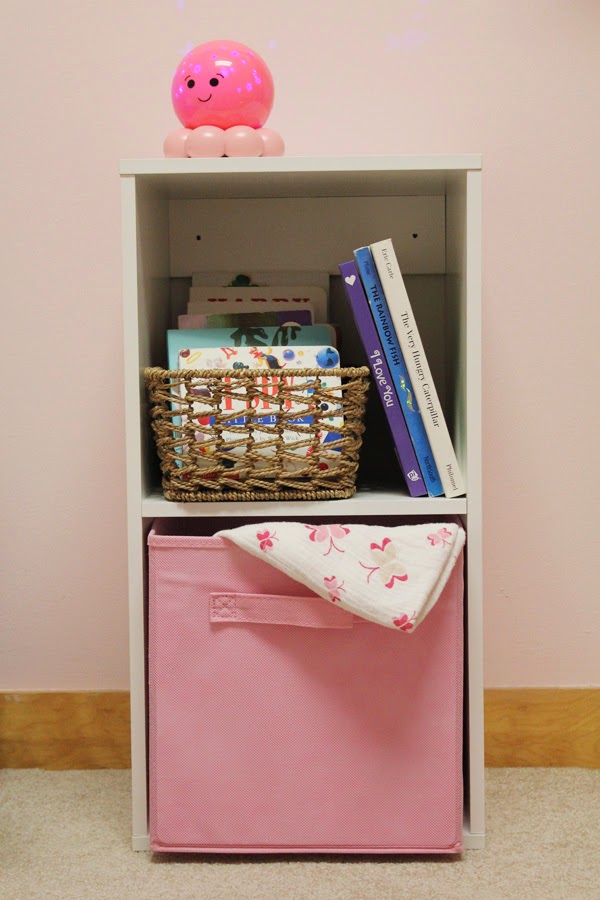 . They are inexpensive and rated to hold very large pieces of furniture through earthquakes. They are also easy to take apart to move furniture to vacuum (hahaha hilarious, right?). All of our big pieces throughout the house are anchored with these.

We also put a swing gate on her door to keep her inside. We'll close her door while she's falling asleep, then open the door and close the gate when we go to bed. This will let her call for us if need be, but keep her from running amok in the house. We have the Evenflo Easy Walk-Thru Gate

and absolutely love it. We've used it for years with Charlie and it's not only easy to install, but Charlie hasn't figured out how to defeat it yet. Mwahahaha!

One small piece of furniture that we left for Ginny was a night stand with a few books and a bin of blankets that she likes to play with. If she pulls them all out, who cares. She'll help me put them all away in the morning.

Right now, Ginny's bed is just a mattress on the floor until I can refinish the bed frame. It'll be white and pink to match her dresser, but is in bad need of sanding. With all the rain we've been getting, its been impossible to get that started. I can't wait to see this all put together! In the meantime, here's to a smooth transition to toddlerhood. 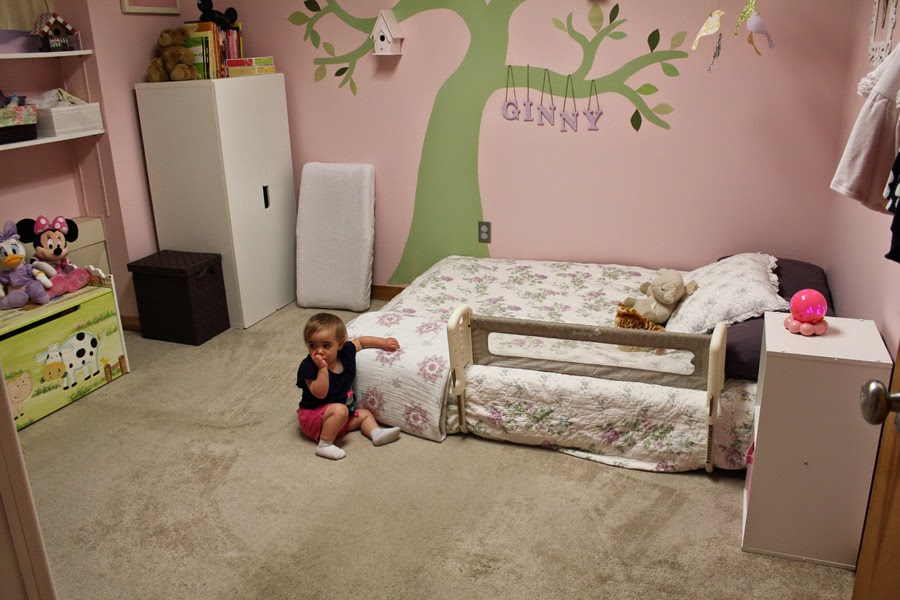