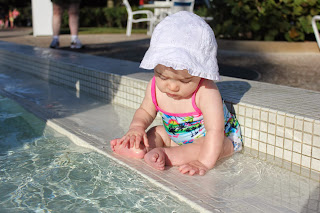 Favorite toys: Stacking cups, her new Rapunzel doll, and anything she can chew on.

Favorite activities: Now that she can sit up, she loves watching people and things. While we were at Disney, she refused to sit in the infant seat facing me - she wanted to sit in the front so she could people watch. She sat content for hours as we walked around the parks. 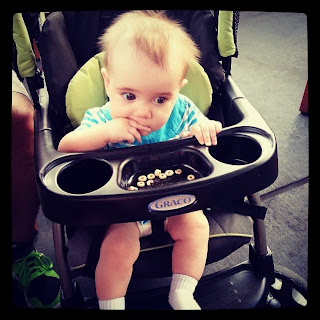 New foods this month: She's mastered picking up puffs, Cheerios, and just about anything else we put on her tray.

Sleep: One to two wakes up per night, but its not bad. She goes back down pretty well.

New Tricks: Belly scooting! She's starting to move a little bit more, but still struggling with direction. She's also saying Dada and Mama to us and trying to give us big sloppy, open mouth kisses.

Favorite toys: This month, I started putting away some of the baby toys and bringing out some of the bigger infant toys like the LeapFrog Cook and Play Potsy

and Fisher Price Roll-a-Rounds Gumballs Machine. They were some of Charlie's favorite and it seems that Ginny is a big fan too. She loves the noises they make and, of course, eating the pieces.

Favorite activities: Destroying the living room! She loves to pull all of the toys out of bins, all the movies off the shelves, and wrestling with her dolls. She is a lunatic and cracks me up! She's started trying to take things from Charlie and he is NOT a fan. 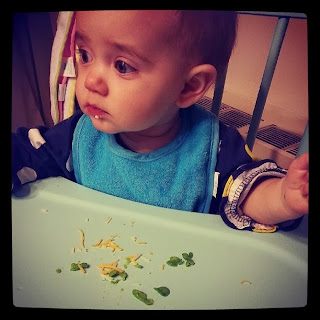 New foods this month: Aside from peanut butter and honey, I think this girl has tried almost everything and she loves it. She has started taking bites of larger pieces of food and trying to use a spoon, so she's well on her way!

Sleep: Still getting up at least once during the night. We're not sure if its from teething or out of habit, but either way, its not fun.

New Tricks: She's getting super fast at scooting across the living room and has started crawling on hands and knees. She figured out how to sit herself up and pull up to her knees (and sometimes to standing). 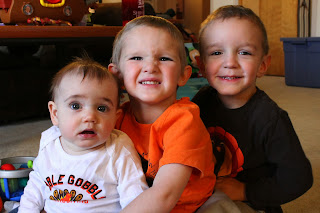 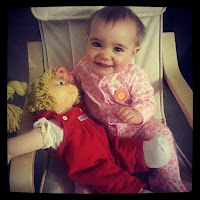