Every year there is mounting contention about Black Friday and what it does to this country. Don't get me wrong - the stores that are opening earlier and earlier really need to take a chill pill and stick to the "Friday" part of Black Friday, but really - what's so wrong with boosting the economy a little and creating extra shifts for people to work? Most retail employees know its coming and, from those I've spoken with, enjoy the extra pay. While I obviously don't agree with the crazy, stampedes of Grandmas throwin' bows, I love myself a good sale and don't mind standing in line for an embarrassingly long time to get it.

That being said, my sister, Christina, and I killed it on Black Friday! I had been doing some sale shopping over the past few weeks, but at this point I think I'm pretty much done buying (and wrapping!) for everyone on my list. ::brushes shoulder off:: At first glance, it seems early to be done, but really there are only about 3 weeks until Christmas and two of them I'm going to be super busy at work. When else would I get it done? 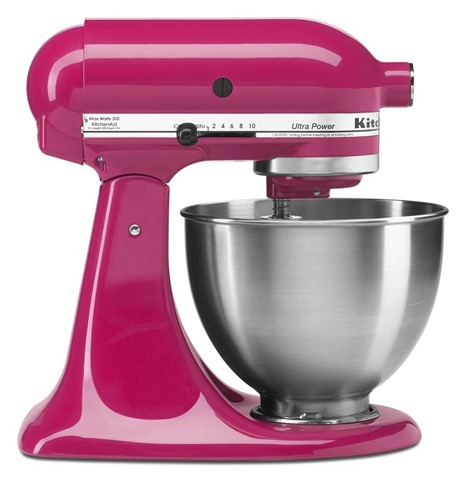 Knowing Target would be absolutely insane for the first few hours, we started at Kohl's to take advantage of some of their lower key sales like bath towels, sheets, pillows, and kid clothes. We found some really great stuff! The store was surprisingly tame and people were very nice. We were in and out of there in an hour. Thanks to their online sales starting Tuesday, I already have my new Kitchenaid Stand Mixer on the way. I've wanted one of these bad boys for years and years - finally pulled the trigger and bought one. With $15/50 Kohl's Cash on top of rebates and additional coupons, it was a steal at about $200 (original $450).

And its hot pink, of course. Gonna be making LOTS of cookies this year with this new little friend.

Target's sales were kind of a let down, to be honest. If you weren't running full speed, knocking people over to get at a flat screen, you were left with sales on PJs and movies. That being said, we scored several awesome movies on Bluray that we've had our eye on. I was able to get the kids a few Disney movies for $6-$10 each (originally up to $25 each) as stocking stuffers.

WalMart had a few good sales, but we weren't going NEAR there until the insanity ended. Last year at midnight, that place was a shoulder to shoulder fire hazard. We ended up finding Matchbox cars for $.60 each and toddler underwear and pajamas for about 60% off. Wow, how Black Friday shopping changes when you're a Mom!

My favorite places to go on Black Friday are the craft stores. Awesomely lame and I love it. Michael's had some great sales on scrapbooking supplies, Christmas decorations, and frames and JoAnn's had their 70% off sales for flannel on Friday and fleece on Saturday. I scored almost 20 yards of various print fleece for about $40 (original over $200!!) I'll be making the kids car blankets and a new bed for the dog. I made Landon's Ninja Turtle blanket yesterday before they left and I'd say he's enjoying it already. 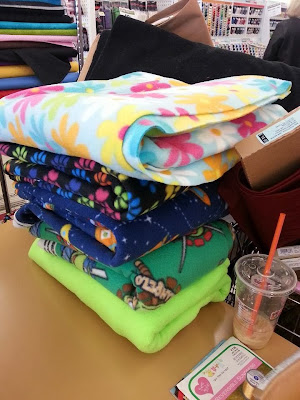 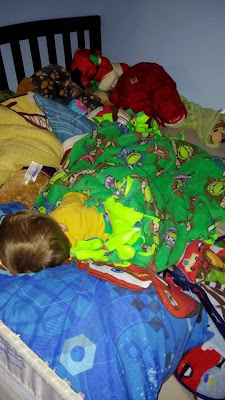 Now to finish wrapping and put up the Christmas decorations! It's my favorite time of year!
Posted by MommaM at 9:18 AM