Before G was born, I was actually pretty worried how C would react to having a baby around the house. Anytime I'd hold another child (of any age), C would desperately try to climb on my lap and sit with me. He was so protective! After being the center of our world for over 2 years, how would be react to sharing the spotlight? We did our best to prepare him for having a sibling, but there's only so much you can do.

When C came to the hospital to visit, to say he was overwhelmed is an understatement. He wasn't interested in the baby (which was to be expected) and only wanted to leave. Poor guy wouldn't even take off his coat!

Now that G is home, however, everything has changed. He still doesn't quite understand why he can't play his drum and xylophone all the time or what an "inside voice" is, but at least its making G a hearty sleeper. He loves to sit next to me when I nurse her (even though he scolds her, "no biting!") and asks to hold her all the time. He's still referring to her as "baby" instead of Ginny, but you can hear the excitement in his voice when he says it and it warms my heart.

I love seeing them together and while they don't exactly interact yet, its amazing to sit with and hold my beautiful babies. 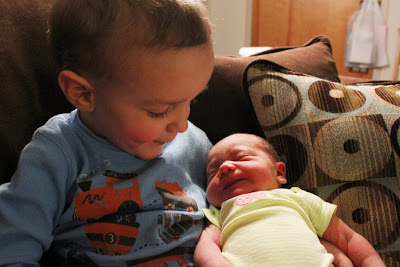 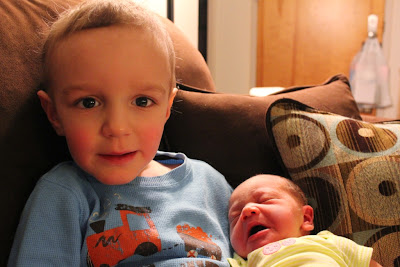