When originally faced with the task of choosing Christmas presents for C two years ago, it was pretty easy. Lets face it, the kid didn't have anything at that point! Now, however, he's got plenty of toys and buying presents has gotten a bit more difficult. With a late October birthday, Christmas comes at a time when he especially doesn't "need" anything else, but of course Santa needs to bring him something.

Growing up, my parents did an amazing job stretching a very small budget to make for a very big Christmas for my siblings and I. Something I realized growing up was that we didn't realize a) how fortunate we were to be getting a large number of things and b) didn't have a good grasp on the fact that there was a budget and my Mom was really good at stretching it. Despite their efforts, I think we felt (and sometimes acted) a bit spoiled -- until we got older and truly understood how much things cost, that is.


In preparation for the holidays this year, J and I were talking about what kind of traditions we wanted to start since we are quickly running out of years that C won't really remember. We decided that we wanted to focus on quality over quantity and most of all appreciation and gratefulness.

Each year, we're going to try and stick to a four present per person maximum; something you want, something you need, something to wear, and something to read. There isn't a cost maximum on each gift and it isn't a contest to spent the most or the least. Its about finding meaningful gifts that fit into these categories so its not all frivolous "want" things.

When C is old enough to understand, we also want to start doing a Santa swap. When Santa comes to drop off your gifts, you need to leave four things you don't use anymore under the tree for him to bring back to the North Pole, fix up, and give to other boys and girls. Eventually, the kids will understand that things just get donated, but we think its a good message to send about giving back (not to mention keeping the house slightly less cluttered).

Anyway, for C this year we're still trying to figure out what he's getting. So far, I'm thinking... 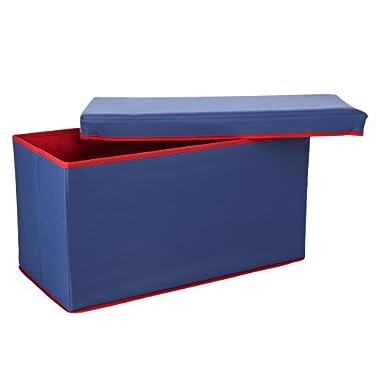 Help! Yes, I seriously have no idea what my toddler "wants" for Christmas. Does a toddler really "want" for something? Toy commercials are lost on him (thankfully) and he hardly eyes up toys as we pass them in the store. I'll think of something. I promise.

Something You Need
A toy box and new toy storage. To be honest, he's getting this early. He has a lot of things that he actively plays with, but they end up all over the house because they don't have a home. Between a toy box and cube storage unit from Target, hopefully we can tame the mess.

To further encourage his complete obsession with Mickey Mouse, I found this adorable fuzzy bathrobe at Kohl's. Hopefully it fits him for a while, but with how this kid has been growing. Who knows!

Something to Read
C has taken a much bigger interest in books lately and reading before naps and bedtime has become a staple in this house. We are still perusing titles, but we're going to get him one or two books about being a big brother and a first 100 words type picture book. He loves pointing out pictures in books and the few picture books we have are, well, getting old.


Hopefully, we can get a few more ideas down pat before too long. I don't like being stuck on present ideas! Want to share your little one's Christmas list? Swing by Growing Up Geeky and link up with Toddle Along Tuesday!