A Shot at Full Term

Here's a quick lesson about pregnancy. When you're pregnant, the placenta has a lot of big jobs to do. One of those jobs is to produce progesterone and keep the uterus at a nice hormonal balance, preventing contractions and labor from coming on too early. During pregnancy, your body also produces oxytocin (the natural form of Pitocin - and we all know what that does) which starts labor. The progesterone keeps the oxytocin at bay and keeps you pregnant until the time is right. Though 39-40 weeks is the optimal time to have a baby, anytime past 37 weeks is considered full term and has been deemed safe for delivery.

Now, a problem arises if the level of progesterone in a woman's body drops at any point prior to 37 weeks since it can make the body think its time for labor, kicking up the oxytocin, and starting contractions. This is called preterm labor. A lot of times it can be stopped, but if coupled with other medical issues (like dilation or your water breaking) or if labor is too progressed, it may be in the everyone's best interest to deliver - regardless of what week you are.

As many of you probably know, C was born at 34 weeks, 5 days gestation due to preterm labor and amniotic sac rupture. There was no indication during my otherwise boring pregnancy that I'd have a preemie, then again, for a lot of women there is no indication.

When I found out I was pregnant again, it was the first thing that raced through my mind. What if this baby comes early? Or even earlier?! Granted, in the grand scheme of things in the preemie realm, J and I won the lottery. He was early, but he was big and relatively healthy for his age. He recovered quickly and though he gained weight woefully slow, he's now completely caught up and in the 90th percentile for weight. What if we aren't this lucky again?

At one of my first OB appointments for this pregnancy, my midwife mentioned progesterone therapy. 17 Alpha-hydroxyprogesterone caproate (17P) is a synthetic form of progesterone administered once a week from week 16 to week 34(ish) to keep the level of progesterone high and healthy throughout the pregnancy. Though its not a guarantee, it reduces the chance of preterm birth by 34-40% in women with a history of preterm labor and rupture. Definitely not a sure thing, but its a shot!

Speaking of shot, that's how its administered - a shot with a huge needle right in the ass once a week for 20 weeks. I was told that it hurts like heck and takes a long time to push because the compound is thick. ::shudders:: I don't like getting my yearly flu shot (I still get it though!) so this should be very interesting. BUT, as a fellow preemie Mom recently told me, "I'd rather be taking the pokes now, than to see my baby getting poked on a daily basis in the NICU." Heart wrenching and true. What C went through (daily blood draws and heel pricks, IVs in his hands and head, etc.) is my motivation to do this - achy, tired side effects and all. 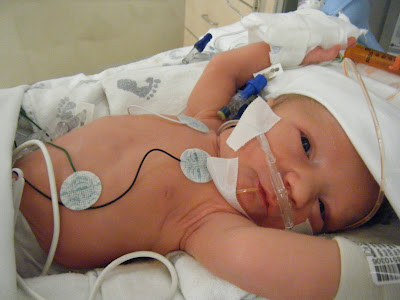 So, at 16 weeks, tomorrow is week one and shot one to give this baby a chance at a full 40 weeks on the inside. I can't help but wonder what if it doesn't work, but at least I know that I'm doing everything I can to try.
Posted by MommaM at 8:11 PM

Labels: Getting Ready for Baby, Pregnancy