When Momma is Away, the Boys Will Play!

The Short Man and I have succeeded in not going all Talking Heads on the apartment in MommaM’s absence.  And I’ll swear to it that the place was clean when Grandma K came to visit yesterday. I can no longer make such a claim. C has taken to climbing into his ball pit and throwing the balls across the living room floor. He’s also developed an early summer skill: He will pull the straw out of his Take & Toss cup and shake it like a popped bottle of champagne. This will surely be useful in June when it is 90 degrees outside, but in March, inside? At least it’s only water. He has an absolute ball doing this, by the way.

Other things C just loves doing when MommaM is not around: 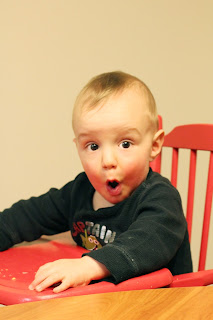 Breaking out the O-face on unprepared family members. The family came to visit last night and C surprised them with an after-dinner treat: He shot them the face for a solid 20 minutes. The only thing better than the face itself was their reactions to it.

Reorganizing the DVDs. C made several attempts today to alphabetize all 60 DVDs on the shelves under the TV. That would be fine, except that his alphabet includes letters that I’ve never heard of. I mean, how do you spell a wet raspberry?

Climbing the steps to the front door. Yesterday was a little scary because C crawled up two steps, sat on his knees, and leaned back. I was standing right behind him, but he landed on his back staring up at me. He’s never fallen off the steps before, but I will now be even more diligent about watching him when he climbs. I’m not going to restrict him from going up the steps because he needs to learn how to handle them, but I am going to watch him a little closer.

We miss MommaM and we promise to have the apartment clean when she comes home. Now if she’d only get a move on!
Posted by MommaM at 9:33 PM