The holiday season is over and things are settling down. The up side for C and the down side for us is that our living room (and kitchen and C's room) look like Toys R Us vomited everywhere! He was happily spoiled by his grandparents, aunt, and uncles. :-) Here are some of his favorite toys!

Grandpa got C super fun presents - our favorite being the baby gate and C's being his Leap Frog magnet sets. I absolutely adore Leap Frog toys. They are high quality, interesting, and well priced. My Dad bought C the Magnet Zoo Animal Play Set and the Fridge Farm Musical Play Set - both of which have been a big hit! We have one on the fridge in the kitchen and one on a cookie sheet (redone with some chalkboard paint) to be more portable.

C's physical therapist has been trying to get him to play more on his knees and practice reaching (to build his leg muscles) and fridge play is perfect for that. He's not able to match pieces just yet, but whether you match a cow or make a sheep pig, it sings silly songs for the matches and mismatches alike.

Another Leap Frog favorite is the My Own Story Time Pad from Grandma. He's still getting the hang of pressing all of the buttons to make the toy respond, but he loves to hear Scout tell stories when we help him with it. This is going to be a great road trip toy once he figures it all out!

Another fun addition to our toy collection is the tunnel and pop tent set by Discovery Kids from C's aunt and uncle. While C isn't quite sure about the tunnel part yet, we put his ball pit in the tent and he thinks its pretty neat. We've tried coaxing him into the tunnel by crawling through it ourselves, which only resulted in my fat butt getting stuck. Hilarious.

C's hands down favorite (and not just because we bought it for him) is his Step 2 New Traditions Kitchen. He is obsessed. Originally, we were going to make him a kitchen from a night stand or other piece of furniture a la Pinterest, but two days after deciding on that project, I saw this kitchen on sale for $60 at Target and couldn't resist. Its small enough for the space we had set aside for it, but was interesting enough to keep his attention for years to come. 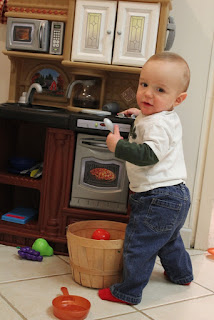 He has been known to sit in kitchen for up to an hour peacefully playing with the pieces, opening and closing the doors, "mixing" in the pots with utensils and just babbling to himself. Its quite a sight.

Pros:
Its the perfect height for our little man to practice standing.
It came with 29 pieces of dishes, cookware, and fake food.
Several things light up and make noise at a good volume.
No annoying songs to hear over and over again.

Cons:
The doors are little hard to open, but should ease up with use.
You have to put all the stickers on yourself. It was kind of fun, but still a pain.

With all of these new toys, we're considering turning my craft room into a toy room. Its right off the living room, so we would be able to keep an eye on him while playing in there. It would get all of the toys out of the living room, but would mean we'd need to find a new space for all of my sewing things -- which is not an easy feat. Who knows whether it'll happen, but its an idea. Otherwise, who knows where all these toys will go!
Posted by MommaM at 10:56 PM