I've spent the last 2 years trying my hardest to make our little 2 bedroom apartment look and feel like a house. Truth is, its not a house - its a smallish apartment. Its a pretty typical set up; 1/3 of the apartment was the kitchen and living room, 1/3 was the spare bedroom and a bathroom, and 1/3 was the master "suite" (bedroom, closet, and bathroom). The spare room became the sewing/office room and eventually the craft/office/nursery when Charlie came along. Our bedroom just had normal bedroom type stuff in it - nothing special.

After spending the last several months only sewing during the small pockets of time when Charlie wasn't sleeping in his room/the sewing room, I realized that we had sacrificed functionality for how a house *should* look. Our moderately furnished bedroom, which as I mentioned is 1/3 of the entire apartment, was hardly used meanwhile Charlie's room was so crammed with stuff that his toys and various baby receptacles overflowed into the already cluttered living room. What is wrong with this picture?

I think I was concerned with how a sewing table would look in a bedroom. *gasp!* How dare I! Its not like we're hosting dinner parties or over night guests all the time. I don't know why I thought it was such a foreign idea at first. So, we moved around a few pieces of bedroom furniture and put the craft table in our bedroom. There is still a bunch of open space in the room and now I can sew whenever I want. Plus, Charlie's room is now an actual child's room and not filled with choking and stabbing hazards. His toys are in there (and not all over the living room) and we can even store his stroller in there instead of near the front door. 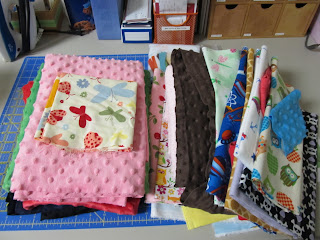 And yes, that's a fresh stack of fabric for loveys and bibs to be made and sent out to my favorite Mommas. <3
Posted by MommaM at 9:50 PM