One of my goals for the past year was the run a 5K, 10K, and half marathon. I've definitely accomplished that and even made my way into Half Fanatics with my record of 2 half marathons in 2 weeks! So, what's next? 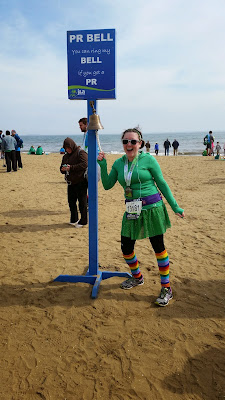 Twelve half marathons in twelve months - how does that sound?


Well first off, it sounds expensive, but besides that it sounds amazingly fun!! What races could I find to fill in the gaps? Something I realized as I started planning was that there are some months that are just not big on races, period. Like July and August - I get it, who in their right mind wants to run 13.1 miles in sweltering heat? Not me, but it has to be done!

Since it's already the middle of June, I think I'm going to forgo finding races this summer and work on conditioning instead, hopping back into the circuit in September. Hopefully, I'll be able to find something next summer to complete the loop! Here's what I have on my wish list so far...

September: Hokie Half (Blacksburg, VA)
You get to run through the beautiful country side and get a Hokie Bird medal at the end. Enough said!

October (1): Crawlin' Crab Half Marathon (Virginia Beach, VA)
This one will be back to back with Hokie, but that just means I'm already trained up, right? After running my first J&A race last March, I fell in love with the whole racing scene in Virginia Beach. With an option to run the "Shell Yeah" 5K + Half challenge, they sure know how to woo me with pretty medals. 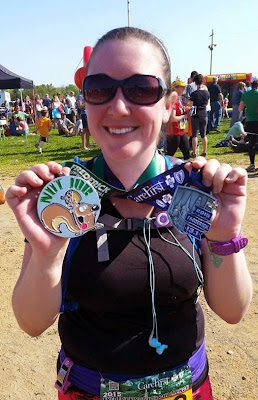 The final leg of the King Crab Challenge, I'm super excited for all the scenery, crowds, and swag from this race. I have several friends coming from across the country to run it as well (for many, their first!!) so it's going to be extra exciting.

November: Harbor Lights Half Marathon (Virginia Beach, VA)
Another beautiful racing weekend in Virginia Beach. I'm not sure if I'll run the 5K + Half "Get Lit" Challenge, but see the above comment about being a medal hoarder.

December, January:
Still looking. These are the months I'd LOVE to run since they're so cold, but alas, not popular distance running months. Maybe I can find a holiday themed something or other...

March: Shamrock Half Marathon (Virginia Beach, VA)
Are you sensing a theme yet? This is my current PR and I'm looking to crush it.

April:
After two big back to back traveling races (Princess and Shamrock) I'm going to try my best to keep this one local. I don't have one picked out just yet, but there seem to be several in the area that can check off the month without breaking the bank.

May: Frederick Half Marathon OR Pittsburgh Half Marathon
I ran Frederick this past year and had a wonderful time, but have also heard great things about Pittsburgh - a city that I absolutely love. They're back to back weekends during a busy time at work, so it'll come down to one tough choice!

June, July, August:
Which brings us back to the main point of this post. There are a few half marathons in June that I've stumbled upon, but July and August seem pretty bare. It may take some creativity or traveling to get it worked out, but I'm open to suggestions!


If you have any suggestions for great races in the PA, MD, WV, VA area, hit me up!