I Drank the Tula Kool Aid

Let's talk about that unexpected time that your 2 1/2 year old suddenly wants to be worn, but all you have is a long outgrown Moby and a nearly outgrown Ergo. That was me a few weeks ago. How can I turn her down? Of course I'll snuggle you, little one! As a bonus, you can't wreck the joint when we go shopping if you're on my back!

Problem was, the Ergo worked, but not for long. Ginny's not a big kid by any means, but just lanky enough to hang out of the top and sides in way that made it uncomfortable for her after a while.

Well, after selling all of our cloth diapers, I needed a new obsession anyway. Enter, the Tula.

So, what is a Tula? A Tula is a baby carrier. That's right, I SAID IT. It's just a baby carrier. You put a baby in it and carry them. I say this because there is an entire culture and society attached to said brand of baby carrier that is both intriguing and overwhelming. Don't get me wrong, this is by far the most comfortable carrier I've ever worn, but the drama and crazy that comes along with stalking, buying, selling, and trading these things is enough to send someone to the looney bin.

I took the easy way, I think. I jumped on a Buy Sell Trade board, picked one I liked, PMed the seller, sent them money, and got the Tula in the mail. Easy right? I thought so. And I loooooove it. 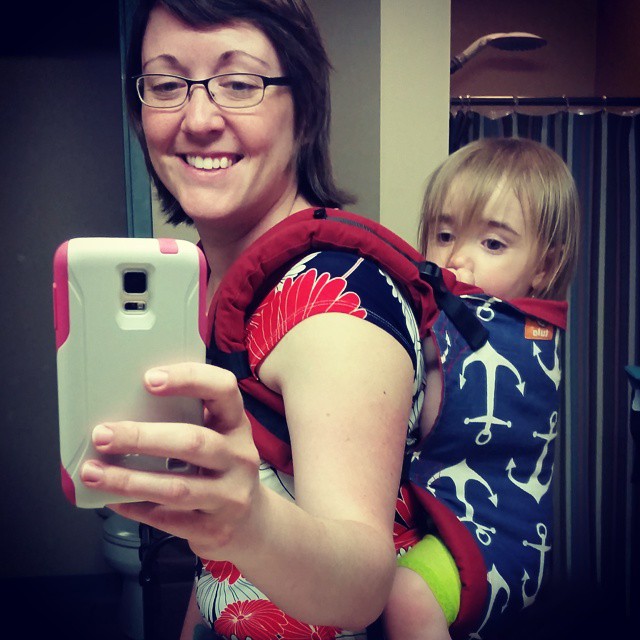 She loves it to, I promise. I may have woken her up from a nap to try it on when it came in the mail...

I get it, they're pretty, they're comfy, and goodness knows the company tries their hardest to play on the scarcity effect with regard to prints. They slap "limited edition" on something and the crazy goes up a few notches! Market value on some of the handmade woven versions are nearly a mortgage payment and no, that is not an exaggeration.

So we had a Tula. Then, because I didn't remove myself from the BST group, we got...another Tula. I know, I know - I have one child of carrying age/size. Why do I need two? Truthfully, I keep one in the house and one in the car. Could I live with one? Heck, I could live with none, but there is something about them that makes me want them all. 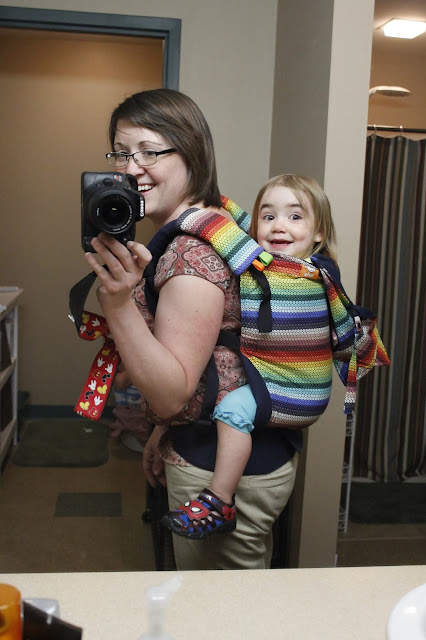 I know, I talk about it like it's a person or something. But seriously, look at this thing. And look at that face! This is Ginny's "rainbow carry" and she asks for it by name. The hood even has dino spikes! It also came with a lot of sleepy dust, meaning I can grocery shop during nap time without summoning demons. 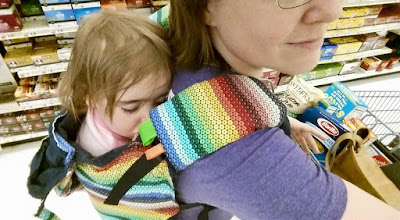 We have the toddler size for Ginny, which goes up to 50lbs! The standard version is good for itty bitties up to toddlers about 40lbs. Ginny could technically fit in a standard, but since she fits in a toddler, why not size up. I could even carry Charlie if he wasn't all torso. Kid can nearly see over my head when he's on my back! In a pinch, I'd totally carry him though. Despite being about 43lbs, his weight was very well distributed across my waist and shoulders making him feel surprisingly light. 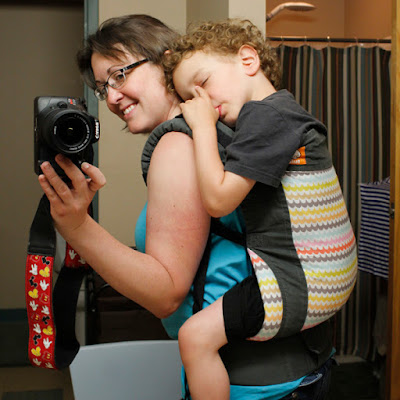 At retail, the canvas carriers run between $160 and $190, depending on print and what not. Don't even ask about market value, but it's more than that. While it's not easy to get one direct from a store or site, there are a lot for sale at or below retail.

Honestly, since they hold their value, I'm not worried about the cost; when we're done, I'll be able to resell them at or above what I paid. It's not a sale, it's an investment. Yes, I really tell myself that crap.

If you're in the market for a new carrier, I highly recommend the Tula. It's well made, quality materials, soft and genuinely comfortable. If you're skiddish about spending that much money without trying one on, check if your area has a baby wearing group or chapter of Babywearing International. Many of those groups have carriers you can try on or even borrow to see if you like them before laying out the money.

In the meantime, I'll be over here, wearing my happy kiddo on the go (while getting strange looks and comments from strangers...but that's an entirely different blog post).
Posted by MommaM at 9:20 PM