Tomorrow, February 28th, is Rare Disease Awareness Day. According to the National Institute of Health, a disease is considered rare if it believed to affect less than 200,000 Americans. There are about 6,800 diseases that fall into this category meaning about 1 in 10 Americans are affected by one disease or another. Together, it's a lot, but individually, having a rare disease can be scary and lonely, not to mention confusing to people unfamiliar with the disease.

Ginny's condition is called Congenital Adrenal Hyperplasia. She has been diagnosed with a specific form called 21-Hydroxylase Deficiency, which in the realm of CAH, is a fairly common cause of the disease. If you really want to get your fancy genetic pants on, she has a genetic mutation of the Cytochrome P450 Family 21 Subfamily A Polypeptide 2 (CYP21A2) gene. Specifically, she has a T & A transversion of the 518 nucleotide causing an Isoleucine & Asaragine amino acid change causing a pathogenic disfunction of the gene. Her DNA variant is homozygous, meaning its the same on both alleles.

CAH is considered a rare disease as it affects approximately 1 in every 15,000 people world wide.

What does this mean?

It means that people are significantly less likely to be familiar with her condition, the dangers, the signs of trouble, and how to help her. This condition is rare to the point that I could walk into an ER with her in crisis and not have doctors or nurses immediately familiar with what she needs. As a parent, that is terrifying.

It is common with CAH for the child's endocrinologist to provide specific instructions via prescription for EMS or ER doctors to follow. Along with a small bottle of her medication, we carry a copy of this prescription in each car, the diaper bag, my purse, and with her things at daycare. We need to be prepared in the event others are not.


How do you get CAH?

CAH is an autosomal recessive genetic disorder, which means that both Jeff and I were carriers for it. We have no documentation of it in our families, so we never knew. All of our children have a 25% chance of having the disease, a 50% chance of being a carrier, and 25% chance of being completely unaffected. With a specific genetic mutation nailed down, we will likely test Charlie in the near future.

Remember 10th grade biology? Well, I've recently had to brush up on it. Your pituitary gland (in your brain) releases chemical messages to tell your adrenal glands (on top of your kidneys) what to do to regulate your body.

The pituitary gland releases adrenocorticotropic hormone (ACTH) to tell the adrenal glands to make cortisol. Cortisol is a stress response steroid hormone. It helps to regulate blood sugar, blood pressure and heart muscle tone, aids in fat, protein, and carbohydrate metabolism, and activates anti-stress and anti-inflammatory abilities in the body.

People with CAH, however, lack the enzyme 21-hydroxylase needed to convert 17-hydroxyprogesterone (17 OHP) into cortisol. No 21-hydroxylase, no cortisol, no stress response.

When the body is under stress, there is typically an increase of cortisol. For those who supplement cortisol, however, their dose needs to react accordingly. A sudden increased dose of medication in response to an event is called a stress dose. Without this dose, the body can go into adrenal crisis, shock, and eventually organ failure. 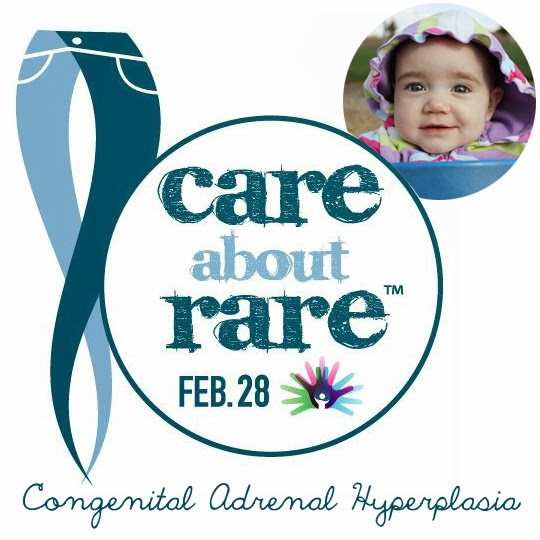 Stress doses are typically given...

Signs of an adrenal crisis include..

As you probably noticed, these symptoms describe almost any illness - another reason this is scary. As they are happening, however, blood pressure, blood sugar, hydration, and sodium levels can be quickly crashing. If I rush Ginny to the ER because she is vomiting and lethargic, demanding an injection of hydrocortisone, they'd probably think I was dramatic. That is, until I showed them her prescription and/or medical alert band (which we will get when she's a little older).

As parents, its our job to make sure everyone who cares for Ginny is able to recognize the signs of an adrenal crisis and when a stress dose of medication is needed. Friends, family, sitters, teachers - everyone will need to know. It's scary, but manageable.

We are fortunate to have caught this at a young age instead of during an adrenal crisis. She won't outgrow this and there is no cure. She will be on some form of steroid replacement for the rest of her life and that's just how things are. We're not sure what her future brings as women with CAH can be significantly shorter as adults and suffer from ovarian cysts, PCOS, and infertility. Obviously, no one wants their child to have an incurable disease, but we are extremely blessed that she is otherwise healthy and we have access to such caring doctors and nurses.


This day each year is a time for individuals and their families to share the stories of rare disease. Alone, they are rare, but together they are strong. Please visit the Rare Disease Day website if you'd like more information about events across the country.

If you'd like to donate to the Global Gene Project to help fund education and awareness programs as well as community building and outreach, please visit their site here.

Labels: A Chance to Give, CAH, Sick Kid