As a new runner, I'm still getting into the swing of things. I don't like investing a ton of money into a new hobby until I'm sure I will continue with it.....plus, I'm frugal. Really, really frugal. The problem with being frugal is that you get what you pay for. I'm not looking for low quality = cheap stuff, I'm looking for quality stuff at an amazing steal. It's a great time of year to find deals on just about everything, so I've been keeping my eye out for deals on work out clothes.

I started at the outlets on Black Friday and discovered something surprising. Even at places like Adidas, Nike, and New Balance, most women's work out clothes = t-shirts and yoga pants. Cotton yoga pants are just about the worst thing you can wear running outside in the winter. You sweat, the cotton gets wet, and you quite literally freeze your ass off. I did find a nice cold weather hoodie at Nike for 60% off on Black Friday. It's quickly become a favorite, running or not. I stopped by the Under Armor outlet and they had a lot of good winter wear, but it was very pricy. As a "congratulations on starting to run!" present, Jeff bought me a pair of base layer pants (40% off, but still $29.99) and I found an amazingly warm, comfortable hat on clearance for $7 (originally $19.99). It's deals like that, that I love!

So, I had a hat and base layer pants. Can't exactly run in just that without attracting a lot of attention! Surprisingly, I found some really comfortable and warm tops and pants at Kohl's. They carry two brands (Cuddle Duds and Sonoma WarmWear) and with the coupons and sales they always run, they are very affordable. With sales/coupons, I got a WarmWear long sleeve top (hot pink with thumb holes!) and a pair of fleece leggings for under $20 (originally $19.99 and $26.00). Let me tell you, whether you run or not, fleece leggins are THE BOMB. I think I wore them to bed for a week straight after buying them. Another pair or two are certainly on my to buy list. Kohl's was also a good place to find sports bras and comfortable, wicking socks. 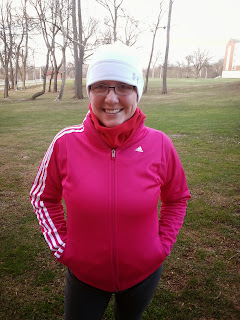 My favorite place so far to score work out wear deals is Ross and TJ Maxx. I found an Adidas Climawarm jacket for $16.99 (originally $65.00) and a pair of Adidas Climalite capris for $9.00 (originally $36.00). Granted, I can't use the capris until it gets warmer, but that's a great deal. Plus, the jacket is HOT PINK. A girl can't have enough hot pink stuff.

On Tuesday, it was about 35 degrees out and I went out in fleece leggings, a sports bra, long sleeve WarmWear shirt, a t-shirt, Climawarm jacket, fleece scarf, and my comfy UA hat. I was plenty warm!

Awesome blogging/running news! I contacted SPI Belt about doing a review on one of their belts and they want to work with me! So, keep an eye out for the review!

Things I learned running this week...

Labels: Doing Something for Me, Fitness Friday, Saving Money