Teething Can Bite Me

See what I did there? It's true though - I'm so over teething and I'm sure Ginny is too. I thought Charlie started early when he got teeth at 5 1/2 months, but Ginny has been going strong since 4 months and its getting ridiculous. Poor girl can't get a break! She's got 6 teeth in (4 on top, 2 on bottom) and is getting two more on the bottom. Slowly.

Charlie never took a teether, but I thought I'd buy a few for Ginny just in case. Good thing too, because she loves them. Frozen ones, chewy ones, hard ones - you name it and she'll nom it. At first, we bought a set of freezie keys by Bright Stars and they work great, but since they're attached, the others melt while she's chewing on one of them. After those, we got this set of fruit shaped teethers from WalMart and she loves them. We can pull out one at a time, so the others stay cold while she works on one of them.

We even sprung for a little Sophie, which she likes, but doesn't necessarily love. It is nice that we can clip it on things with the loops and bring it with us. 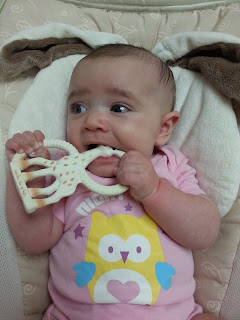 The whole sleeping through the night from 2 months old until 4 months old was short lived, but appreciated. With all these teeth sprouting, she's getting up at least once in the night, but we're not sure if its from the teeth or just a habit at this point. Oh, the mysteries of babies. The good news is that if she teethes like a mad woman now, she'll get them all fast and we'll be over this stage. Until then, pass the coffee!
Posted by MommaM at 11:11 AM