The last week has been a big one for check ups. Charlie had a check up with his pediatric GI specialist and his 3 year well child visit and Ginny had a follow up with her endocrinologist. Both kids got flu shots and we're officially ready for flu season!

Charlie's well child check went fine. The pediatrician was impressed with his grasp on letter, shapes, and numbers and he was able to do an eye exam with the regular letter chart. Now that he's jumping, skipping, and talking in full sentences, any and all concerns we had about his development being delayed are put to rest.

Unfortunately, his GI check up didn't go as well. We're still trying to figure out what is going on and as it turns out, he's lost a pound in the past month. It could be a result of the stomach flu he got on our way back from Florida (complete with puking on the plane), but it still worries me. We're trying two new things - a new dosing schedule for his medication and a new probiotic. As it turns out, a bacteria based probiotic isn't effective if you're also taking antibiotics because its destroyed. Well, gee - that makes sense and I feel like an idiot for not realizing it earlier. We're switching him to a yeast based probiotic that is known to help with this type of issue. Thankfully, there is a lab brand of the stuff because Florastor is expensive (about $2-3 a day). Here's to a better month. 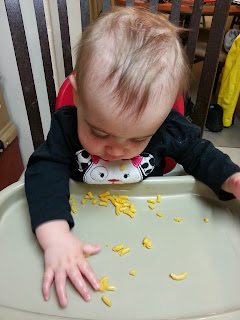 Ginny's follow up went alright. She hasn't grown an ounce or an inch since her 6 month appointment about 6 weeks ago. This means she's fallen down to the 5% percentile for height and weight. She started in the 60-70% range. I didn't think it was possible, but she's actually smaller than Charlie was at this age - and I thought HE was a peanut. It could be a fluke or it could be her medication. Her doctor scaled back her meds from three times a day to twice a day and ran some blood work to see what was up. We'll hear more next week about the results.

So, they're healthy - just not exactly growing. Their next check ups are at the end of December/beginning of January. In the meantime, Charlie's getting probiotics and PediaSure and Ginny is eating everything put in front of her.

Chunky kid vibes appreciated.
Posted by MommaM at 7:00 AM