A suggestion we got to help him become more interested in dressing was to have him pick out his own clothes. Okay, I can get behind that concept. The only problem is that his dresser is tall and I don't want to promote him rifling through the drawers. I fold enough clothes around this house already!

While picking up those flat diapers at IKEA, I found this nifty pocket storage in the kid's section for a whopping $3. It was exactly what I was looking for! Mounted on the back of C's door, we can put weather appropriate outfits in it and let him choose what he wants to wear. 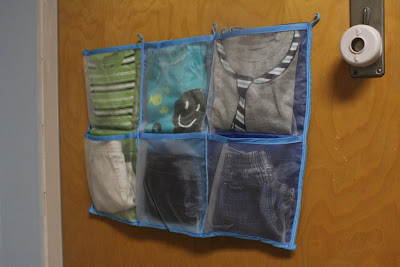 Turns out, he loves choosing! At the moment, we're only putting three outfits (shirts on the top row and coordinating pants on the bottom row), but could easily expand to six choices. The mesh pockets hold the shirts so the image shows. At a toddler friendly height, he can retrieve his chosen outfit and if he does decide to empty the pockets in the middle of the night, its only a few items to put away. Its funny, we've always given him verbal choices, but this was the first time we made it so accessible, which was apparently the key. He's taken much more interest in putting on his chosen outfit and is quickly learning how to put things on and take them off.

With this new found freedom to choose, making multiple colors of cups, types of snacks, and choice of activity available is actually soliciting a reaction from him. He's finally realizing that there are situations in which he can pick things. The trick to this, however, is to make sure he understands he has the power to choose SOME things. Skipping bedtime is not an option, but you can choose the story we read. Dinner is not negotiable, but which vegetable we eat can be.

Its fun watching him develop and express preferences and favorites. So far he has an affinity for the color yellow, shirts that have characters/animals on them, and watching the "Rocket Soup" episode of Little Einsteins.
Posted by MommaM at 8:00 AM