I'm not quite sure how to categorize today's potty training attempt. It wasn't a complete failure, but it wasn't exactly a "good" day, so maybe a semi-success? Let's just say we'll be taking this one day at a time.

The set up. For today, I had 11 pairs of underwear on hand, a waterproof mattress pad for the couch, a big jug of water, mini M&Ms as a reward, and his potty chair. There are many opinions on where to put the potty, but I chose to stick in the living room. Yes, I realize that under normal circumstances you want them to pee in the bathroom, but since I was simultaneously taking care of G, I wanted to be able to coach C through a potty break if I was nursing or otherwise busy. We'll work on making it to the potty first, than to the bathroom. 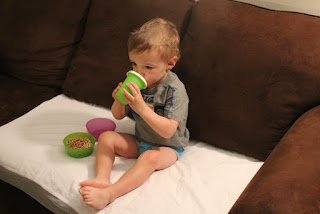 It's no secret that C is a little high strung, so I started out the day very slow. I changed his diaper and gave him a choice of underwear to put on. Then, I gave him a big ol' cup of water and started a 15 minute timer. I downloaded a simple kitchen timer app on my phone that let me set an alarm for potty breaks. Super helpful when you're also taking care of a newborn and constantly lose track of time.

Thankfully, G napped very well this morning so I got a lot of one on one time with C. Whenever the timer went off or I noticed his underwear a tad wet, I asked him if he needed to go and calmly moved him towards his potty. Most times he sat and sat and sat. A few times he actually peed. One time he said he needed to pee and when he sat down, pooped! Yeah, we went through pretty much every pair of underwear and almost 40 ounces of water (I swear, this kid is part camel), but it was going alright.

Then around noon, he peed on the floor. Like, a full pee. And I accidentally scared him.

I saw him peeing. No big deal, let's go over to the potty! My voice was calm, but my actions were slightly frantic. I grabbed him under the arms, quickly moved across the room, and plopped him down. I celebrated the few drops that made it in the bowl. He lost it. I don't know if he thought he was in trouble or the wet underwear were uncomfortable, but from then on he became more anxious and stubborn when I asked him if he needed to go. I put him down for a nap (with a diaper) and when he woke up, he'd lost all interest in using the potty and didn't want to put on underwear.

I know he's a sensitive kid and I'm not going to push him. We'll start again tomorrow. I think the more I accept his temperament and tailor this process to him, the more successful he will be. He doesn't respond well to things being done "to" him and I should have remembered that. Maybe that means letting him pee on the floor, then asking him to sit on the potty after the fact. Not ideal, but better than him shutting down.

As a side note, microfiber cloth diaper inserts are great for soaking up accidents!

The biggest success for the day? This evening, we were filling the tub to give C a bath and he was standing on the bath mat throwing in toys. He stopped and said, "pee pee!" A few seconds later, he started to pee all over the bath mat....and I was super excited! He knew he had to go! That's step one!! He'd never said that before. Despite all the pee I cleaned up today, I know that no matter how slowly, we are getting somewhere.
Posted by MommaM at 10:10 PM