Time for that lull between Christmas and New Years where you gorge yourself with yummy holiday treats, try to get your kids to sleep in while you're on vacation, and wrangle all of the new toys that are all over your living room. So far, we're excelling at #1 and #2....and trying to figure out #3. While C didn't get a ton of toys for Christmas this year, he did get a few and has quickly shown us which ones are his favorites.

This year, Santa brought him some art supplies, clothes, and a few toys. While he's still exploring everything he's gotten, here are his favorites so far. 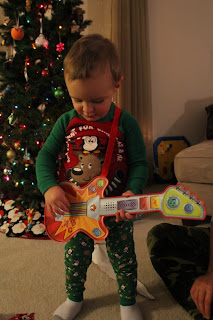 If you know C, you know that music, especially the guitar, is his favorite thing in the world. Therefore, the LeapFrog Touch Magic Rockin' Guitar was pretty much as perfect of a gift as we could muster. We made the happy mistake of letting him open it on Christmas Eve and he would not put it down! He brought it to bed and then wouldn't open any other gifts in the morning.

While he's having a little trouble getting the strap on by himself, he quickly figured out how to turn it on, adjust the volume, and change the songs and other settings. It responds to touch, so there are no raised buttons to get gunked up by sticky toddler fingers and plays songs that he recognizes (Itsy Bitsy Spider, ABCs, etc.) Its also very light weight and easy for him to hold.

I promise, its not nearly as annoying as you'd think. 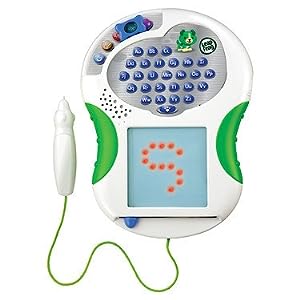 Score another one for LeapFrog. Last Christmas, C got the LeapFrog My Own Story Time Pad

and it was a big hit. To our surprise, it even taught him letters! The next step up from that is the Scribble and Write. It works off of letter recognition and works on drawing shapes and letters. With several different modes (shapes, lower case, upper case, and games) it seems to have a lot of function and will keep his interest for quite a while.

As with all LeapFrog toys, it has a volume control (woo!) and uses the same characters and voices as their other toys.

He's still feeling this one out, but since he's been learning numbers and animals, this was a logical toy choice. It says for 3+ and it will take a few months for him to really learn the rules of the game, but in the meantime its fun for matching and identifying.

Plus, lots of pieces to throw around the living room?! SCORE.

C also received some of the classics - crayons, Play Doh, and a baby doll. He goes back and forth between kissing and throwing his baby doll, but he's 2 - what do you want. :-)

What are your kid's favorite Christmas toys this year?