Its that time of year again! GARAGE SALES! I am the direct descendent of what I consider to be the garage sale guru. My Mom was not only a crazy good buyer, but she was an amazing seller - making over $1,000 during the most epic of her annual sales.

While we didn't exactly make a grand this weekend, we did get rid of a ton of stuff we've had set aside in boxes labeled "yard sale." A nearby school district was having a huge community yard sale. $15 bought you four parking spaces (two for cars, two for your stuff) for six hours. We got up early, set up shop, and sold our crap. The cool part? All of the selling fees went towards a "Newspapers in the Schools" program. Yay education! 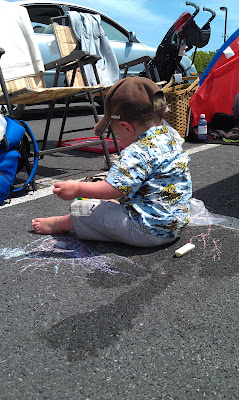 We were able to unload a ton of books, movies, and video games, a few electronics, an old PS2, all of J's old comics and comic book cards, and a ton of baby clothes and toys. Stuff that was literally just taking up space. When all was said and done, we'd made $215! Thank goodness too, we could really use it as we prepare for J to be out of work all summer. Stupid 10 month education jobs. The budget is going to be tight, but we've been couponing and stocking up like crazy lately. More on that later. ;-)

Aside from our selling success, the weather was absolutely beautiful, and C was an angel. I brought the entire toddler entertainment arsenal - bubbles, chalk, blocks, cars, and of course snacks, but we really didn't need to do too much entertaining. The spot next to us was a darling retired couple who spent the whole time talking to C and playing with him. The man's name was Charlie as well and he got a kick out of our C in his little Hawaiian shirt.

C played and we hung out in the nice weather - it was a wonderful day. I also scored some neat stuff from other sellers! I got a 1960's metal bread box, a basket that sits on the steps, a dozen Ball canning jars, and a neat lazy Susan for my craft supplies - all for $20. The bread box alone is worth more than that! Unfortunately, we were the ONLY booth with boy clothes, but that's alright.

We were pooped after the sale (getting up at 5:30am and all that) so we spent the rest of the day just relaxing. Sunday was Mother's Day and after a super yummy breakfast and wonderful presents from my guys, we did some shopping, some playing, and some time outside. What a lovely weekend!