When I was in graduate school, I really wanted a dog. I grew up with dogs and was generally a dog person. Unfortunately, I wasn't allowed to have a dog where I lived, but I was allowed to have a cat. Cat? Um, okay - guess that's better than no pet, right?

While home one weekend, a family friend said his cat recently had kittens and that I could have one if I wanted. Sure, why not. There were three grey boy cats and this little lady... 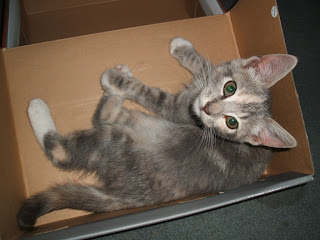 Hear that? That's the sound of me becoming a cat person. What can I say? Her bat ears stole my dog-lovin' heart. She curled up on the back seat of my car and slept in the sun the entire five hour trip back to school. J and I decided to name her Jodie. Not quite sure why, but why not.

That was the summer of 2007. Since then, Jodie has been a furry, weird little part of our family. Why weird, you say? She plays fetch like a dog, hates wet food and treats, her favorite place to sit is a 10 quart plastic bowl, and she LOVES being in the car. 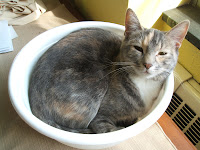 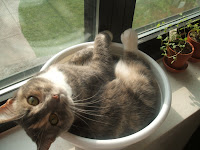 She quickly outgrew the bowl, but still made a valiant effort to sit in it regularly.

She moved with us from graduate school to our first apartment in Virginia, around campus, came to summer camp with us, to visit family, and everywhere in between. 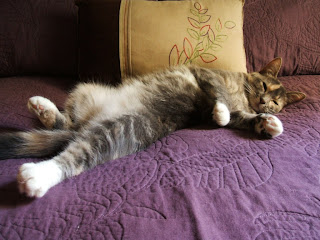 Unfortunately, she couldn't live with us when we moved back north. Talk about a sad day. There was the slight possibility of having a pet in our new apartment sometime in the future, but at the time we moved in, there was no pet policy. Off to Grandma's house she went until we figured everything out. I was beginning to think we were never going to be allowed to have her back when the pet policy was reinstated and we could have her back!

This past weekend, when my mother-in-law came to watch C, she brought Jodie back home. It was weird and wonderful to have her back. Its only been about seven months, but it feels like its been years.

When Jodie left, C was about 9 months old and not crawling/mobile. He probably doesn't remember her, but I could be wrong. Well, they are well acquainted now and he is OBSESSED. While we were gone this weekend and Jodie was adjusting to the apartment, MIL taught C how to say "cat" and its his new favorite word. Whenever he sees her, he takes off crawling and starts squealing, "Cat! Cat! Cat!" Poor Jodie! She does so well with his attempts to "pet nice."

Our little kitten (who isn't really a kitten anymore and will be five on March 30th) is home and we are so excited to have her back!
Posted by MommaM at 7:00 AM