The C man is sixteen months old and incredibly busy. It seems like he's learning new words and skills everyday! Sometimes I don't know where he gets some of this stuff, but its so much fun to see his little personality blossom more and more as time goes on.

Clothing size: He's completely outgrown his 12 month pajamas and most of his 12 months jeans. He's well on his way to all 18 months clothes!

New tricks: I'd say this is a good one. Still not mastered, but its a great start. Another new trick is eating with a fork and spoon pretty efficiently and stacking blocks/cups.

Teeth: Nothing new, but he loves getting them brushed!

Sleep: He has been sleeping well and usually puts himself to sleep by babbling to his toys.

Favorite toy:  While the kitchen is still a favorite, he's taken a huge interest in blocks and other stacking toys as well as anything with wheels. He zooms cars and trucks across the floor and coffee table making car noises.

Favorite food: Pineapple, which unfortunately, doesn't love him back.

Things that make me all sad because he's getting so big: He has started the transition from the toddler 1 room to the toddler 2 room at daycare. Today, he spent most of the day with the bigger kids and played with Play Doh and had music and art time. 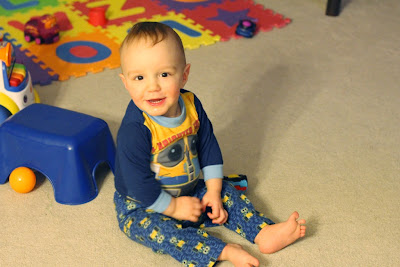 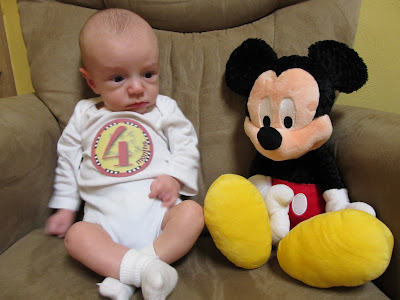