What else do you do on a day off - how about clean the whole house? We've been so crazy busy lately that the house has, unfortunately, taken a back seat. Not a huge issue if you ask me, but we're having guests stay the next three weekends, so its about time to get down to scrubbing.

The main areas of ick were the bathroom and the kitchen. Why is that always the case? To be fair, the bathtub and the kitchen floor were pretty dirty when we moved in from what I can only assume were years and years of bare bones cleaning by the previous occupants. There is no other logical reason for the permanent ring around the tub or black tile grout. Gross.

This was the perfect opportunity to try out some of my new home made cleaning remedies! For the tub, I tried the grapfruit salt scrub from Apartment Therapy. It was super easy and ridiculously cheap, plus it smelled amazing! It didn't get rid of the permanent ring, but it did scrub away any other grime and soap scum around the tub. J was happy with it, but mostly because he got to eat the other half of the grapefruit. Definitely something I'll do again.

For the kitchen floor, I used a paste of Borax, baking soda, and water along with a Mr. Clean Magic Eraser and a toothbrush. Oh, and plenty of elbow grease.

Two hours later, the floor went from this... 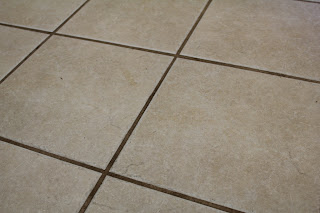 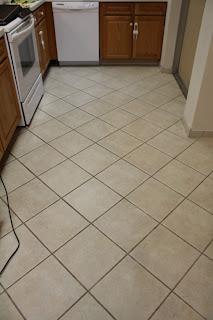 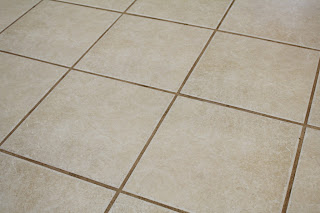 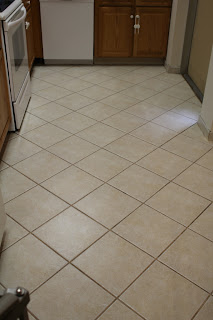 Not earth shattering, but a huge improvement if you ask me. The kicker is that after the scrub down, I ran the Shark mop over it and the mop head STILL turned black. ::sigh:: I'm doomed to a dirty kitchen floor.

After additional dusting, vacuuming, and vinegar/water wipe downs, the house is arguably cleaner than it has ever been without using one single chemical. Woo!

Another project motivated by my no chemical kick and, of course, Pinterest is homemade dish washing detergent. Not only detergent, but pre-measured little soap biscuits - like the kind you'd pay $6 for a bag of 16-20. Using the recipe and tutorial at Lady with the Red Rocker, I made detergent with Borax, washing soda, Kosher salt, and Lemi Shine then slowly spritzed it with a water bottle until it became the consistency of wet sand. Then, I packed it into a tablespoon to create pre-measured little soaps.

In the tutorial, it calls for putting each soap biscuit into a little paper cup as it dries and for storage, but I found that tapping the table spoon out onto parchment paper until it hardened (about an hour) worked well. I then took one of those plastic shoe bins (WalMart - $.97) and layered parchment paper and soap biscuits. I doubled the recipe found on the tutorial and got over 70 biscuits! Its very dry right now because of the heat, they hardened really well. I can imagine in the middle of the summer it may be a little different, but we'll cross that bridge when we come to it.

So far, so good! The detergent biscuits fit in our soap dispenser perfectly and it works better than the store bought stuff! Our plastic doesn't have a film anymore and everything rinses so clean.

The awesome part about this recipe is that you can adjust the amount of Lemi Shine according to the hardness of your water. We've got middle of the road water, so a 1/2 cup of Lemi Shine works perfectly. Harder water, add more to the mix; softer water, add less. Nothing beats being able to customize a product until its exactly what you need.

Now we've got dish detergent for over two months (at a cost of about $4) and a clean house. I could get used to this.

What are your favorite homemade cleaning tips/tricks?
Posted by MommaM at 11:30 PM