Last week I didn't get a chance to post my 52 Weeks of Pinterest challenge, but with C's birthday party going on, you bet I did something Pinterest related! I found a ton of inspiration for C's Very Hungry Caterpillar party from Pinterest, but one of my favorite ideas was serving "caterpillar food."

While we didn't serve the menu exactly, it did give us a lot of great ideas for appetizers and even the main course. After printing some adorable little signs from Rachel at Polka Dots and Puppies, the table was set.

Another fun addition I picked up from Rachel's blog was using a copy of The Very Hungry Caterpillar book as a guest log for people to leave C birthday messages. What a wonderful keepsake from his first party! 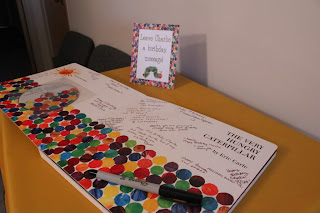 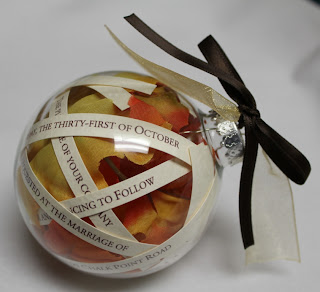 For this week, I did two projects because I had a little bit more time. Imagine that! I made a magnetic make up board and a wedding invitation glass ornament.

I can't lie - that little ornament was way harder than it originally looked on Pinterest. At first, I put in all the pieces of paper, but it was very difficult to get them into position. After fighting with them for a while, I pulled them all back out using tweezers and filled it with some fake leaves. After that, it was much easier to slide the strips of invitation in between the leaves and the glass with some pattern to it. Sort of. Topped off with some ribbon, I really like the way it turned out. 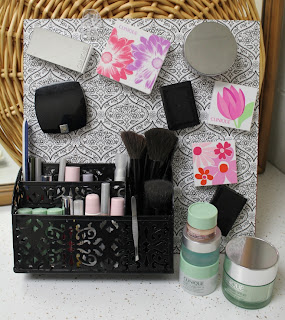 The magnetic make up board was much easier. I used an old metal desk stand that I had actually found during campus move out a few years ago. I covered it with some pretty scrapbook paper and attached magnets to the make up compacts I use most. Some were too heavy for the small magnets, but that's alright. For my brushes, lipstick, and other odd shaped things, I found a neat magnetic locker organizer that just stuck itself to the board. Voila!