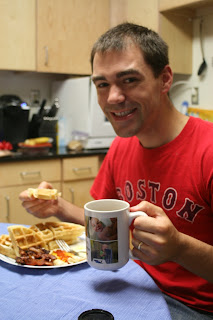 Why a part two? Because I was too lazy to upload pictures yesterday. Here we go!

For Jeff's first Father's Day, I did the Shutterfly photo project thing and made a mug and a notebook with Charlie's pictures on them. Super cute! The top prize according to my husband, however?

Originally, Jeff said he wanted to go to IHOP for Father's Day breakfast. I'm sorry, but waiting an hour to be seated with everyone else in town did not sound fun with a teething baby. Yes, after two weeks of Jeff craving waffles, I decided to just go get a waffle maker. I even found one of those snazzy ones that you flip over to cook. He was tres impressed.

I made waffles and he made bacon and eggs. Yummy breakfast! 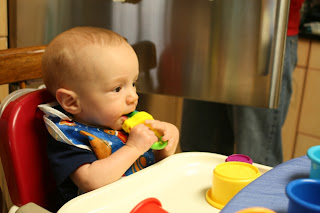 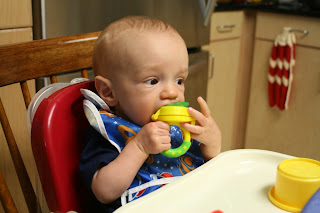 Charlie contributed by sitting quietly in his high chair working on chunks of banana shoved in a mesh feeder. Word of advice for you - these mesh feeders are really awesome, but a complete pain in the ass to clean out. Banana is ten times harder than normal to get out because of its wonderfully slimy nature. Regardless of the mess it made, Charlie absolutely loved it. After eating his normal oatmeal and fruit, he devoured 2/3 of a banana in that thing.

As we sat down to eat, I realized that it was our first meal together at the table as a family. Yeah, we're those people - we eat in front of the TV for pretty much every meal. Our kitchen table normally serves as a pit stop for mail, stuff to be put away, my purse, etc. It was really nice to have breakfast together. We may need to do that more often. <3
Posted by MommaM at 6:43 PM