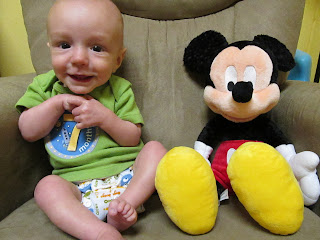 That's no typo. My tiny preemie cuddle bug is seven months old! We won't have an update on his stats until his weight check on Thursday, but we're thinking chunky thoughts. Maybe its my hopeful side, but he feels heavier and bigger to me. Whenever I pick him up, its like there's more there. I'm hoping all the oatmeal, fruits, and veggies he's been devouring over the past month have put on at least a pound. I'll post an update after his appointment! 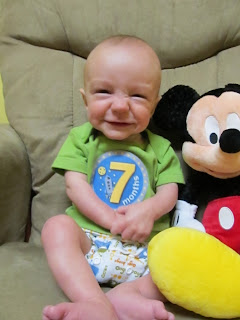 This month, aside from really getting into solid food, Charlie has gotten better at baby chatter, sitting better when supported (read - doesn't immediately fall over), found his feet, tried a sippy cup, and has developed a love for being outside. Laying out a blanket with some toys on the grass in the shade is a sure fire way to get a chill baby. My little nature boy. We're going to set up his baby pool tomorrow and try that out. Hopefully, he's a fan of water because its looking like its going to be a very hot summer. 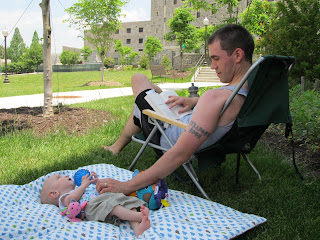 Another upcoming first isn't an exciting one, but necessary none the less. Next Wednesday, Charlie is scheduled for an outpatient surgical procedure to correct his moderate hypospadias. He should be in and out in a matter of hours and will be allowed home by the afternoon. The tough part is going to be not being able to feed him after midnight and trying not to be worried about the anesthesia. Despite living in a rural area, there is a great outpatient surgical center nearby that has a pediatric anesthesiologist and urologist. Seriously, how lucky are we? His urologist has assured us that though he'll be cranky the first 24 hours, he'll be back to normal shortly after that and heal up quickly. In the grand scheme of things, this is very minor and routine, but I'm a Momma; I can't help but worry! I know everything will be alright and once the surgery is done, poor Jeff can stop telling Charlie, "I'm sorry buddy - we'll get this thing fixed soon!" during every diaper change. :-P 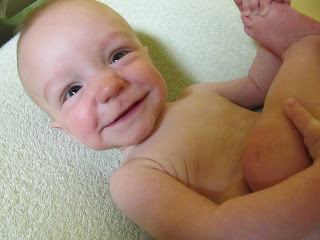