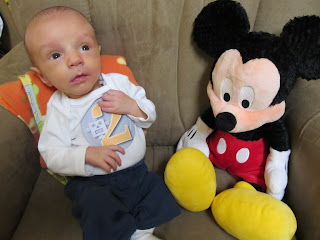 Our little boy is getting so big! As of New Year's Eve, Charlie is two months old! We don't have weight/length stats just yet (his check up is tomorrow), but we do have some cute pictures of him and Mickey. Last month, Mickey towered over him, but this month he's the same size!

Unfortunately, two months old also means that there are a few vaccinations waiting for him at tomorrow's doctor's appointment. Thankfully, we're going after Jeff gets back from student teaching so we can take him together. 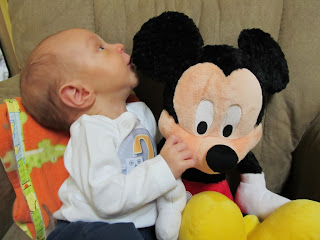 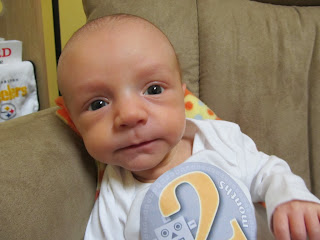 This past month, Charlie reached a few milestones and is soooo close to others (like smiling). He has started to coo and make more noises (that aren't crying), he's getting better head control when he's on his stomach, he's spending more time awake, and he even slept in his crib last night! He'd been sleeping in the bassinet part of his pack and play lately, but last night he was squirming around and just seemed so uncomfortable. Around 3am, I gave it a shot and put him in his crib, which is much more comfortable. To my surprise, he passed right out and slept for three hours! I, of course, slept in the glider right next to the crib. I couldn't just leave him in there alone!! We were planning on having him sleep in our room until three or four months, but if it helps him sleep more comfortably and for longer, I guess I can deal with him moving out a little earlier than expected. *tear* Because of the middle of the night switcheroo, I left a note in his pack and play that said, "CRIB" so Jeff wouldn't freak out if he woke up and saw that Charlie was missing. Pretty smart for 3am logic, eh?

I'll update his stats when we get him weighed tomorrow. My bet is somewhere around 8 1/2 pounds and 23 inches long. We'll see!