This past weekend, Charlie and I embarked on his first road trip! Our mission? To see some good friends, attend Doug's college graduation, and introduce Charlie to his aunt, uncle, cousin, and grandpa. 1,100 miles later and we've both made it home in one piece (and me with my sanity). Though it was a little nutty to drive that far with a 7 week old alone, it turned out to be a great weekend!

We left on Friday morning around 8am and made our way to Lock Haven. I fed Charlie right before we left (I literally had my coat and shoes on) to make sure we got in as much driving as possible before stopping. To my surprise we made it almost to Winchester, VA (about 3 hours away) before having to stop. Tip #1 for traveling with a baby. Whenever the baby needs to stop to eat, gas up and grab a snack. I learned this the hard way. When we stopped around Winchester, I fed Charlie and then got back on the road. About 40 minutes later, as Charlie was happily snoozing in the back, I needed gas. Only problem was that he wasn't due to eat for another 2 hours or so and I knew stopping would wake him up. I didn't really have a choice and had to stop. He eventually calmed back down and fell asleep, but only after 20 minutes of crying. Lesson learned.

Stopping to feed Charlie only added about an hour to our trip, which wasn't too bad. We arrived in Lock Haven around 4:30pm and hung out with George, Lisa, Katie, Emmy, and Danielle for a while. It was so good to see everyone and finally see George and Lisa's cute new house. It had been years since I had been in Lock Haven and being back there really felt like home. :-) After some chatting and dinner, we were back on the road headed for Indiana, PA. Tip #2 for traveling with a baby. Regardless of how well you prepare, a baby stuck in a car seat all day long WILL eventually cry for no reason other than crankiness. With the exception of staying calm and focusing on the road, there is nothing you can do about this. Its heartbreaking, but trying to reach into the back of the car to tend to them is just plain dangerous.

We arrived in Indiana around midnight, checked into the hotel, and met up with Doug. Thankfully, he was there to help me bring in all of our stuff. Tip #3 for traveling with a baby. Don't over pack. Seriously, babies need enough stuff as it is. Chris, Mike, and Landon arrived shortly after us and they got to meet Charlie for the first time! Thankfully, both boys slept really well that night and didn't keep each other (or us poor parents) up all night.

Saturday, we spent time with Doug, saw his dog's adorable new puppies, and went shopping in Pittsburgh. Most important of all, we got Bob's Pizza!!! The best pizza outside of New York, if you ask me. Though the traffic sucked into and out of the city, it was fun to get out and do something different. The Pittsburgh Mills is gigantic and kept us busy for most of the evening. While we were there, I found Charlie a new friend. After all, every boy named Charlie needs a Snoopy. <3 If you sit Snoopy on the bed next to him, he stares at him and babbles. I think its because he can see him better than many other toys since he is black and white. It is ridiculously adorable. 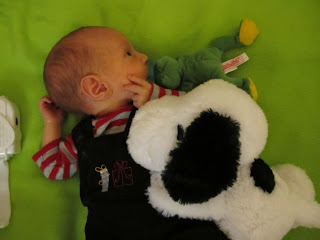 Sunday, my Dad and Nick came out from eastern PA for Doug's graduation later that afternoon. It was so good to see everyone and spend the day together. We had breakfast at Eat n Park, then headed to campus for the ceremony. It was so strange to be back on campus, especially since it looks so drastically different from when I was there last (about 2 years ago). That's what happens when they knock down all of the residence halls and built completely new ones. 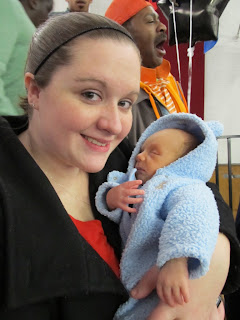 The ceremony was really nice and the speakers were good. Slightly long winded, but good. There were about 300 students graduating from the various colleges represented, but Doug's college was dead last, so he spent much of the ceremony texting Chris and I ridiculous things. What else was there to do? :-) Charlie did surprisingly well during the ceremony and slept the whole time. We were sitting in the bleachers, however, which was not the most comfortable seating arrangement for holding a baby. Thankfully, we were able to pass him back and forth between Chris, my Dad, and me. He slept the best for Chris, but I'm not sure why. Something about a sleeper hold? 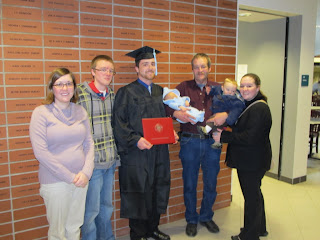 I can't believe how fast time has gone by. I remember when Doug was a freshmen! Now he's a college graduate and I'm so proud of him! :-)
Nick is next to go, which is even crazier. I remember changing his diapers. Haha 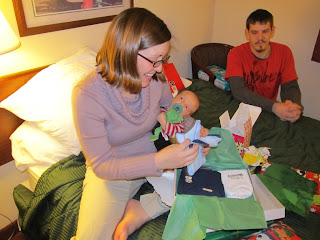 After the ceremony, we headed back to our hotel to hang out and exchange gifts. Since Jeff, Charlie, and I are unable to come back up to visit for Christmas, we decided to have our own pseudo Christmas when we came to visit for graduation. Landon and Charlie made out like bandits! Charlie got such wonderful presents from Aunt Chris, Uncle Mike, and Landon, Uncle Nick, Uncle Doug and Chelsie, and Grandpa. He got adorable outfits, toys, Baby Einstein CDs, a Christmas ornament, a doorway bouncer seat, a cozy blanket for his car seat, Steelers sippy cups, and a beautiful cross stitch of his name made by Aunt Chris. He is one loved little boy.

Charlie wasn't the only one who got awesome gifts. My Dad bought me the most thoughtful gift I've gotten in a very long time. He bought me a birthstone charm for Charlie that matches mine from my Mom's necklace. <3 Now I can wear them together.
Though we didn't get a ton of time together, the weekend was wonderful. We really do need to move back north closer to family. I don't want Charlie growing up with only the occasional visit during the holidays, especially since him and Landon are so close in age. We'll see what the job search turns up in the spring! In the meantime, more visits between VA and PA are in order.
Posted by MommaM at 4:24 PM