The Ups and The Downs

As of yesterday, Charlie is a whole week old!! I can't believe it. Its been a long 8 days for sure, but things are getting better bit by bit. Last night, Charlie weighed in at 5lbs. 10oz. (down from his birth weight of 6lbs. 1oz., but holding steady for the past 72 hours) and this morning his bilirubin levels came back at about 10.5, which is slightly down from yesterday. Though he's been holding his own weight wise, the doctor is still concerned that he's not getting enough calories and therefore not gaining. Currently, he's up to about 35-40 ml per feeding (a little over an ounce), but should be up near 45-50 ml per serving. He's still getting tired out half way through a bottle, leaving us to practically torture him to stay awake for the last 15 ml or so. Whatever works, I suppose. We were told, however, that if his eating takes a dive (like it did this morning when he only ate 20 ml) and stays there, he may need an NG tube to feed him....and I would really like to avoid that. In other news, we've got a meeting with the NICU lactation consultant this afternoon to give breast feeding another shot. He's been getting milk via bottle, but I would really like for him to nurse (and not to pump a thousand times a day for the next year). A sleepy baby is not a good nurser though, so we'll see how things go. I keep hearing that as preemies get closer to their due dates, they develop more stamina for nursing (which is more difficult than drinking from a bottle).

When it comes to things like nursing stamina, I'm finding that his weight is deceiving. Most babies born at 34 weeks are 3-4 lbs, not 6lbs, so when people see him, they assume he's got the strength of a full term baby since he's about the size of a full term baby. Unfortunately, that's not true. Developmentally, he's still a preemie with common preemie issues and we just need to be patient with him as he learns and grows.

The good news of the past 24 hours is that since his eating habits have gotten a little better, he has less need for IV fluids to suppliment...no more IV! I was so excited to come in yesterday and see all that tape off of his little head. He's still got the velcro dots on his temples for his bili light shades, but that's okay. One step at a time. 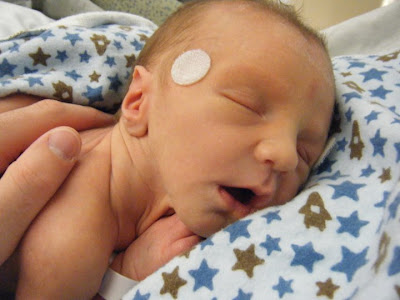 Here he is napping with his Daddy after a long day. I just love that little face of his. I could look at it all day long. :-)
﻿
Posted by MommaM at 2:36 PM